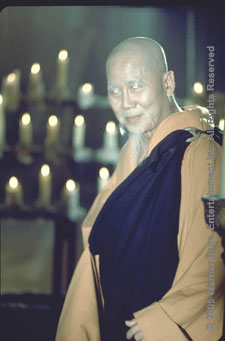 "This family of Grasshopper's may not be blind, but they do not see. So sad."

Bangkok, Thailand - Has-been karate guy, D-Movie star and over-aged actor David "I am Caine, I will auto asphyxiate you" Carradine was found dead in his hotel room, a rope around his genitals.

But his family is completely missing the obvious, and insisting on an FBI investigation, that has so many problems on so many levels.

"We try and help family, make little of this. Why they wish to investigate obvious?", said Sum Yung Boi, Chief of Police for Bangkok. Sum is refering to the series of obvious facts such as David Carradine's great age and poor looks, his known history of sexual perversion, the testimony of his ex about incest and dangerous sexual practices, his presence in a country known for being the place to go for underaged boys, girls and ladyboys with which to indulge perverse sexual fantasies with, his presence in the sex and AIDS capitol of that nation, and indeed, the planet. Deep breath. The known availability of sex for hire, the presence of ubiquitous drugs, the fact that he was in a hotel room, the fact that he was nude, the fact that he had a rope around his genitals, and the fact - rather glaring - that there was no one else there.

"Family tink that ladyboy stay around? Wait for poreece? If his relative ask me about his wallet again, I scleam. Already said no money in it. Duh.", said an exasperated Chief Boi.

He has already asked the FBI, who if they did investigate would only be about 8,000 miles out of their jurisdiction, to drop the obvious. "Mistah Carradine velly long time fliend, no want more heart ache. What happen in Bangkok is like your Vegas, yes? If consolation, the ladyboy we did not find said that he was gleat, velly good man. What more any one want?", said Chief Boi as he ended the interview.