UnNews:Face of Jesus discovered on seabed 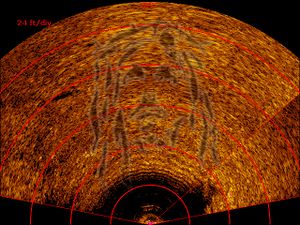 Is this the Messiah's mugshot in the mud?

CLASSIFIED OFFSHORE LOCATION -- An ROV performing survey operations for a mineral extraction company, recently discovered a familiar face on one of it's sonar sweeps..... Jesus!

The location is classified until mineral rights and drilling permits are established as the area is estimated to yield around 87 billion barrels of crude making it possibly the largest find on the planet to date. As part of the recent deep-sea oilfield prospecting survey operations in the area, an ROV (remotely operated vehicle) was deployed to provide a seabed profile grid survey and sonar scans of the seabed around a proposed drilling site approximately 1800 metres below the surface. Whilst normally a routine task, the purpose is to find anomalies such as unexploded bombs, sunken ships, giant rocks, illegally dumped radioactive waste... objects that might make drilling and laying pipeline in the area problematic and prove too costly to remove. Such objects though are rarely discovered other than the odd beer bottle usually making the job a boring but necessary formality. The task however began to turn supernatural as inexplicable events occurred soon after the image was scanned.

The ROV in question began to behave erratically shortly after the sonar scan was made and was promptly instructed to investigate the area in greater detail. Unexplainable events such as loss of video, sonar, and control made the task impossible. When the vehicle was recovered to the surface and examined, no fault could be found with any of the equipment and thus no explanation for the technical difficulties encountered could be given. In addition, known existing faults with the vehicle had also disappeared. Was there divine intervention?

Pope uninterested. Initially a copy of the image and a detailed report of the events were sent to the Vatican but there was no formal response or comment from either the pope or his representatives. Further inquiries into the reason for the lack of interest revealed that Vatican staff had all been busy selling stocks and assets in order to buy up shares in a certain oil company that has been receiving a lot of recent media attention.