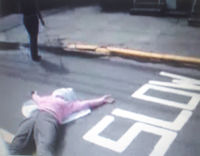 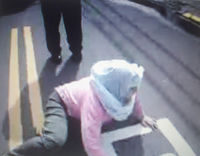 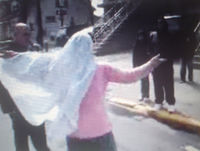 The piece, titled Tristé and the Mechanical Bull was greatly improvised, the artist claims from her jail cell. The act, an interpretive routine involving an epic battle between the performer and a 2005 Nissan Altima, is said to "represent humanities struggle against technology and the corporate consumption monster." The eccentric artist shroud her face with a cloth, representing the universal equality of all humans. Her performance, partially captured on film by an onlooking fan, featured Tristé jumping on the car wildly, wrestling it for a few moments, then dramatically falling to her demise; a representation of man's final hour. Her piercing screams, carefully placed throughout the act, echo the despair of humanities collapse under the grips of evil technology. The car's driver, unaware of the artistic value of Tristé's act, immediately phoned the police.

Days after her arrest, the partial video of Mechanical Bull made its way to the internet, catching the attention of many prominent European art critics and filmmakers. On his blog, French artisté and cheese connoisseur Henri LeBruile heralded the film as "...a major achievement in avant-garde filmmaking. A masterful and powerful expression of an anguished soul." A collective of enthusiasts are preparing a website for donations to the Tristé Legal Defense Fund (which has currently raised over $17USD in support).

According to Tristé, the act was ended prematurely due to interruption by local law enforcement. She claims that, though she had been laying in the street for over 7 minutes, her original intension was to portray man resurrecting like a mighty phoenix, triumphantly battling the unsuspecting automobile into submission. The video includes Tristé abruptly ending the act, and her attempt to explain her artistic style to an unreceptive policeman who had been called to the scene.

Though charges are still pending against the artist, her growing popularity in the art world is making Tristé's sentence seem like a mere bump in the road. Several experimental filmmakers (including the illusive and, magical Bogdanovich) have expressed interest in working with the artist upon her release from prison. According to Bogdanovich: "Shes, eh... got a spark about her. Yes. She's quite, *sigh*, a presence. I-eh, I think she'll only get better on the-e, the big screen." Though still in seclusion somewhere in the rainforests of South America, former Bogdanovich partner and maverick avant-garde director Unrelated Quotes Guy has also expressed interest in Tristé, but of course, his message to her representatives was unintelligible (being that it was a block quote from Benjamin Franklin's Poor Richard's Almanac, completely unrelated to anything involving a collaboration).

Prior to Mechanical Bull, Tristé had released a number of similar short films. Zombie Juice, an act completed in 1999, involved the artist repeatedly spilling boiling coffee in her lap at a Starbucks café. Another previous work entitled God is Falling featured Tristé dropping a television from her 53rd-story apartment window, then frantically racing to the ground floor in an attempt to land under the plummeting box (gravity proved too fast, however; several clothing lines were severely injured). Both of these features are becoming collector's items among fans, and are said to contain gripping social commentaries similar to Mechanical Bull.