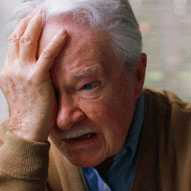 This man is obviously fine, he doesn't have any problems, UnNews say he is putting it on.

The cause of this catastrophe was a stunt by local man Simon on Friday. The stunt was an attempted jump over the 300m long quarry in Snowdonia. Even though the man completed and survived the jump, a rare orchid was destroyed in the process.

Now with English Nature ready to sue the ex-member of their organisation, several members are complaining of Post Traumatic Stress Disorder. However, the lawyers fighting the case for Simon are calling these Disorders to be over exaggerated, and "just a tactic that is being used to fight the case."

"Simon has made donations to English Nature many times in the past, I can't see why they should just let him go like that," said Simon's close friend, "Even if he did destroy some plant that they were trying their hardest to save."

Law Doctors have been called in to diagnose the symptoms that members of this malicious organisation have been complaining about. However, many doctors just think it is a tactic for the case as well.

One of the members, 67, has had post traumatic stress disorder since the event, and was reported to have screamed for help after hearing about the tragic misfortune.

The President of English Nature had nightmares, panic attacks, refused to leave the house at times, and blamed lack of control for what had happened.

The court hearing will take place on Thursday Nov. 26th.