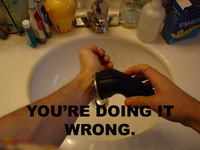 God says you're doing it wrong.

MINNEAPOLIS, America: In a controversial U-turn on His normal policy on emos, (ie damning them to the deepest, darkest pits of hell), God has decreed that emos, actually, shouldn't be permitted to indulge their full emoness to the full extent that nature compells them to.

This innovative new turn has come after claims from outspoken, deranged minority groups that God is not real.

"Although we all need rid of this plague upon the earth," said Reverend Simmons, leader of the far-right religious group "God Hates MySpace.com", "allowing emos to kill themselves has been scientifically proven to increase their need to reproduce, by producing 'happiness chemicals' that have been known to increase libido. Tantalising though it may be to wipe the goddamn creatures off the face of the planet, we could be making more. And we all know how disastrous that could be."

For the first time in His almighty reign, God has listened to these followers and implemented the 'No Emo Suicides, Damn You!' rule. The first emo to suffer under this was the 15 year-old incurable MySpace user, Joshua Hanson.

Joshua Hanson, in one of those stupid, attention-seeking wastes of time that characterises emos today, had tried to end his own life by leaping off a 17 storey building in the centre of Minneapolis.

But, due to nothing other than divine intervention, he landed on a roof awning, and was punished with multiple broken bones, and some internal injuries. In accordance with God's divine scheme, he is expected to recover.

Mr Hanson leapt through a floor-to-ceiling window at the end of a corridor, after returning to the building after a night of heavy MySpacing, dying his hair an even darker shade of black and crying in a shady corner. Witnesses say that they have no idea what it was specifically that prompted him to commit emo suicide, but clues can be found in a letter that he left in his pocket. Written in his own blood, it stated a number of times that 'cutting my wrists has just got... old.'

God said he was proud of the success of this operation, and is sure that Mr Hanson will now feel no need (or indeed have the ability to) reproduce.

"This should be a positive step towards eradicating the emo menace," said God, while trampling a MySpace n00b underneath his feet.