", said Jerry in an interview. However, this claim was questioned by mathematics teachers worldwide who argued that

. They used mathematical “proofs”, which are obviously tricks to make students believe in wrong things. Most mathematical proofs use commutativity which, as its name suggests, is a huge communist plot. Commutativity results in ridiculous equalities such as teach=cheat, god=dog, spine=penis, and live=vile=evil. For more information, see anagram.

~ a typical math teacher in a lesson

“In other words, the sine of 60 degrees, or two thirds of a right angle, is equal to or same as the square root of 3/4, three quarters or one half plus one quarter.” 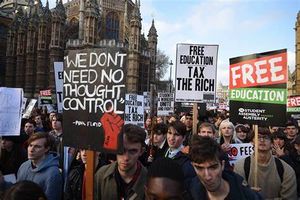 This protest in London intended to fight for the freedom of thought, but was misunderstood by some illiterate people.

Disagreement on the value of sin60° is the cause of several major student protests in the past two years. One of them blocked main streets and crossroads in London and lead to traffic congestion in most of the city. But only recently did Uncyclopedia find the cause of them. 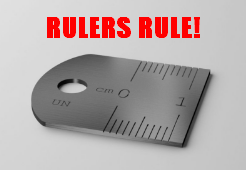 RULERS RULE!!! However, shown in the picture is an UnRuler, which is unruly.

To settle the dispute, researchers at Uncycloversity held a contest. Participants would submit photos of their work to an Uncycloversity webpage. The first three persons to measure the value of sin60° accurately would win 1,000,000 dollars. In the 17th second of the contest, three contestants submitted their answers with rulers shown on their photos. "RULERS RULE!!!" yelled Тнфмдs, one of them. The first, second and third winners were awarded 1, 000 and 000 dollars, respectively. The winners' results were unanimous; all three got 13/15. This proves the fact.

Students can be amazing. A quick method to draw a line perpendicular to the given line from a point on the given line was invented by a student. It is much faster than the "standard" method teachers use. However, the inventor did not provide a "proof" of its correctness, so most teachers do not accept it. A few do, though. One of them is Phüg Yóú, Jerry Yóú's father. Because Phüg Yóú trusted unproven statements and methods, he has been severely punished by the Unternational Science Association (USA). Other astonishing things invented by students include the word assist, which means a person who studies asses. A student came up with it when the English teacher asked for -ist words. A therapist, however, is just a rapist named The.