UnNews:Dog to run for mayor of Alabama town, despite mudslinging 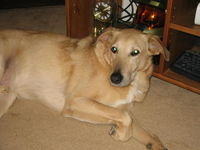 FAIRHOPE, Alabama - Buddy, a local golden retriever, today announced his plans to run for mayor. Despite lacking several things necessary to be a successful politician (such as experience, age, running papers, and being human), the canine is expecting to jump right into the race, which already includes dozens of candidates. When asked why he had decided to throw his metaphorical hat into the metaphorical ring, Buddy barked and wagged his tail. The dog's professional walker, MaryLouJane Manhader, expressed concern about Buddy's candidacy, but decided to support him anyway. "Well I was worried at first, because he's not even capable of leading my other seven dogs, or my nineteen cats," she said earlier today. "But he's great with kids! Well, not my kids. I don't have children. "

Buddy's candidacy has evoked many emotions from the local townsfolk. The most common feeling is one of apathy. However, some citizens are outraged by the canine's campaign, which has adopted the brazen slogan of "Vote for Buddy." Particularly vocal in the movement against the pooch is Buddy's owner, who has started a vicious smear campaign designed to point out many of the dog's alleged flaws. His claims include allegations such as Buddy being a homosexual, a communist, and an African-American. "That's just ridiculous!" said Manheder of the mudslinging. "Buddy is certainly not a communist, as he is a descendant of Sam 'Eagle' Patrioticness, who was owned by Joseph McCarthy. He is a noble dog of the supreme Aryan race. As far as his sexuality, I challenge you to find a male dog that hasn't sniffed a few in his time." Buddy's only comment on the smear campaign was to chase his own tail. 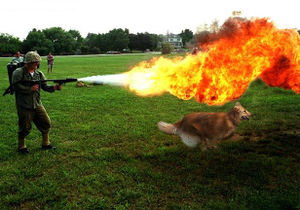 An artist's rendering of the hateful feedback Buddy has recieved.

Despite detractors, the Buddy campaign grinds slowly on. The dog could be seen this week meeting with current city officials and licking babies in the face. Like any novelty attempt to run for public office, this one is sure to elicit far more news coverage than necessary; it also brings of memories of 2003, when a horseshoe crab narrowly lost a bid to become governor of North Dakota. If elected to office, Buddy has promised to lower taxes, improve public schools, and overcome his fear of the vacuum cleaner. Current polls show the dog trailing the leading candidates, tallying only six percent of voters. However, it is thought that if the ballot proposition to allow dogs to vote is passed before the election, it will greatly increase Buddy's chances; many of his staunchest supporters are his canine cronies. When asked about his chances for winning the election, Buddy growled and placed his tail between his legs, perhaps indicating a fierce resolve to become mayor. However, it may simply have been indicative of the arrival of the mailman.