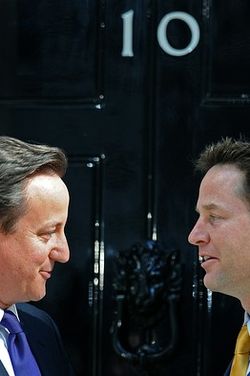 Nick Clegg and David Cameron look at each other longingly after announcing their upcoming nuptials.

WESTMINSTER, United Kingdom -- As we previously reported here, Nick Clegg and David Cameron have been facing the task of making the current Government appear more stable and far more butch than it has been perceived since it was first elected in the hung Parliament of 25 May 2010. The Prime Minister and Deputy Prime Minister announced today, in a follow up to Cameron's speech to mark the Coalition's first anniversary,[1] a further step designed to both strengthen the governing coalition and also make Cabinet meetings far more dynamic and interesting. Mr. Cameron and Mr. Clegg today announced their upcoming wedding, to be held in Westminster Abbey in the presence of Her Majesty, the Queen, sometime in the near future.

The announcement produced a number of varying reactions across the UK and the world, with one senior Tory MP saying in relief, "it's about time those two stopped meeting in the closet at 5:00 am and moved in together. They are obviously hot for each other."[2] Another Tory had a different take on the announcement, screaming at the top of her lungs as she ran about the House Chamber, removing articles of clothing in despair, "You will see a lot more slamming of doors and use of the word 'whatever' from us within the government." She also said, "I like to think of it as 'tetchy liberalism'".[1]

The announcement came as a surprise to many, although rumours of Mr. Clegg's affair with a "David from Whitney" have been circulating for months without being confirmed or debunked.[1] Clegg was recently heard to proclaim that "I have already drawn a chalk line around my area of the cabinet table and he [Cameron] is not allowed to use it or put his hand in it or put any of his stuff in it, because it's mine."[1] That proclamation now seems to have been a smokescreen to cover their budding romance. Prime Minister David Cameron, asked about the announcement while visiting a bridal shoppe in his Whitney constituency, merely smiled and said that he and the Deputy Prime Minister have worked very, very well together and that things "have developed naturally in the Coalition's internal relationships."

In related news, former Liberal Democrat leader Charles Kennedy has announced that he and Lord Paddy Ashdown are now cohabitating, former Prime Minister and member of the Order of the Garter Sir John Major was recently photographed actually wearing garters and a corset in a private meeting with Labour leader Ed Balls (which apparently they did), and several members of the Coalition Cabinet (known in the House as the group gropers) have now begun having a Cabinet "meeting before the meeting" in which, according to the Parliamentary Private Secretary to the Queen, "more interpersonal relationships are being nurtured and refined."[3]

Political analysts across the UK have already begun speculating on how this announcement will change the nature of the Coalition going forward. "I mean, I mean, what happens when Nick wants to be on top? Is there a precedent problem there? What happens when one of them asks the other to 'leave the room for a private conversation' for a moment in the middle of the actual Cabinet meeting? Does this redefine politicians in Parliament screwing each other? This situation opens up a number of new and challenging issues for the future of civilization on earth, as well as the next year of the Coalition," mused political scientist and former Labour Royal Dog Catcher and Retainer of Barks, Barking, Drools and Droppings in Newcastle-on-Tyne Dr. Wish I. Waspeemm.[4]

The couple is registered at Harrod's, Conservative Central Office and the Liberal Democrat Headquarters in London, as well as Wilma's Sex Emporium and Leather World in Chelsea. Buckingham Palace will send out invitations to the state wedding as soon as Her Majesty the Queen is revived from her most recent fainting spell after having heard the news yet again.[5]