MADISON, Wisconsin -- A local couple unversed in the various denominations of Protestant Christianity made a terrible mistake when they decided to try "going to church" and went to a Kingdom Hall of Jehovah's Witnesses instead.

Mary and Donald Rathbone, neither who had ever had a "church upbringing", had been having marital problems, and decided that being a part of a church like a couple they knew from Donald's job would be the thing to do. "I've always wondered about the networking opportunities of church membership, and Mary figured it would be a great way of making new friends, so one evening we agreed that we'd try it. Neither of us really knew much about the Bible, but we were aware of the whole Jesus dying thing, so figured we'd pick up the rest as we went along." 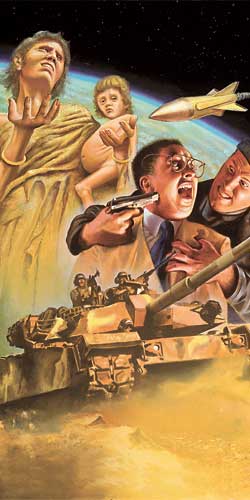 Just a taste of what the Rathbone's will suffer for having been turned off of Christ by the Witnesses.

Regrettably for the Rathbones, their ignorance of approximately 1,000 plus years of Christian schismatic history, the multiplicity of denominations of American Protestantism, and the rise of various odder belief systems from "off brand" to "flat out cult" led them massively astray.

"We figured, 'a church is a church'", related Mary. "But if this is what's needed to find Jesus, he can stay lost."

Dressing in same "dress casual" attire that their church friends always were wearing when they dropped by after church for brunch, they immediately noticed that everyone else was in suits or dresses. There were also no pews, nor bibles or hymnbooks provided. As to greeters, that was primarily people giving them odd looks, before an older man asked them who their Bible Study teacher was.

They were to be asked that seven more times, and each time they said "no", the person would offer to give them one. "How did they know we didn't know about the Bible?", Mary asked her husband, who shushed her and led her to a couple of free chairs. In the hall itself, they were struck by the lack of crosses, and the auditorium style feel of the room. There was, however, a giant sign with a Bible verse at the front of the room saying, "Wives, submit to your husbands, as he submits to Christ."

Without further fanfare, everyone around them pulled a hymnbook out of the briefcases they all had, and started singing songs that neither of them had heard before. "There was no choir, no organ, not even a piano. Just some CD playing in the background, and everyone singing.", said Donald later. "Everyone but us, who just stood there looking silly!".

After that, a guy in a suit spoke about how the end was near, and that soon everyone could work on building "Paradise Earth", while being governed by 144,000 people who would lead from heaven. This was surprise to the Rathbones, who had thought that the point of attending church - at least in part - was to be able to get to heaven. Apparently this was not to be, at least not for them.

While both had some discomfort at the unfamiliarity of the message, Donald seemed to take it better than Mary, particularly the parts about wifely submission. On the other hand, he was uncomfortably aware of the pack of Marlboros in his jacket pocket. "Guess we're both going to the hell that those Witnesses said doesn't exist.", said Mary. "But that sounds better then rebuilding Earth for all eternity with Donald as my master!"

They were further surprised when everyone got out magazines and some guy went over one of the stories in the magazine, asking different people in the congregation for the answer. All in all, the Rathbones decided that Christianity must not be for them. Escaping another four invitations to Bible Study, they went home and attempted to blame each other for that bad idea.

However, while it’s been six months, they are still peppered with calls, visits, and an ever increasing collection of Watchtower magazines. Destined now to never receive Christ’s mercy, the Rathbones have forevermore given up on going to church.