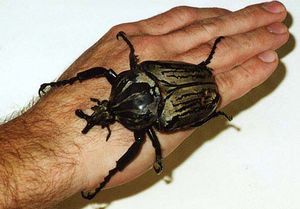 HOBOKEN, NJ -- Confused, distressed owners of Pet Emporium Plus in Hoboken accidentally purchased several thousand cases of large, parasitic insects Wednesday in a preemptive rush on the reemerging popularity of The Beatles. Citing news stories about The Beatles: Rock Band and remastered album sets available in both stereo and mono formats, Pet Emporium Plus immediately attempted to make as many beetle-related products available as possible, including food, accessories, and training manuals.

Almost immediately, store clerk Dan Foresman, 17, corrected the manager's misunderstanding. According to Foresman, the manager went pale and retreated to his office, where he occupied Line 1 for several hours demanding recalls and refunds.

"I mean, he's old, I thought he knew who The Beatles were," Foresman told UnNews. "But... I dunno I guess he's just kind of dumb."

Manager Larry Abrams refused to respond to calls, as his line was constantly busy. Sources close to Abrams describe has behavior as a "sweaty, drug-addled, nightmarish frenzy" that involved "smoking $20 bills" and "self-flagellation."

UPS expects Pet Emporium Plus's massive order of beetles to arrive within two weeks, long after the current Beatles phase as wound down. Psychoanalysts predict Pet Emporium Plus to be destroyed via arson within a week after that.

John Lennon predicts no countries, religion, possessions, or heaven. Reportedly it's easy if you try.