UnNews:Bush aides 'hung out with Taleban' 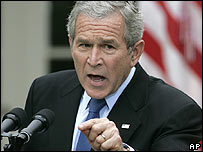 U.S. Puritans are beginning to learn what Mormons, Catholics, and Jews have known since 1856: that Republicans are minions of Satan.

WASHINGTON, D.C. -- A new book by a former US official says President Bush's top political advisers privately embraced fundamentalist Muslim leaders and mocked psychotic Calvinist militants, while publicly ridiculing the cursed Mohammedan heathens and loving Puritans. Dr. Strangelove says the aides recognised the religious leaders' political use in combating terrorism and justifying the unwinnable War in Iraq. The White House has denied the claims by Strangelove, a former official in the Department of Homeland Security.

The Republican Party is concerned the allegations may harm its standing in next month's mid-term elections. With just weeks to go before what promised to be highly competitive congressional elections, and many of their lies pissing off the majority of Americans, Republicans can ill afford to lose the support of their Puritanical, psychopathic, warmongering Calvinist base. So the allegations made in Dr. Strangelove's book have set alarm bells ringing in the White House.

The former official alleges senior aides to the president described the Puritan and Southern Baptist leaders in private as "nuts" and "goofy", while acknowledging their political use in securing election wins.

White House spokesman Tony Snow denied the accusations, saying: "These are people who are friends of many of us in the White House. You don't talk about friends that way. When Our Divine Leader talks about the Faith-Based Initiative, this is one of these things where he believes years and years down the road... this is going to be one of the signal accomplishments - harnessing the power of faith and forever abolishing the wall between church and state the naive founding fathers set up in the Bill of Rights."

But for the moment it is a short-term goal of keeping a Republican majority in congress that seems most at threat by these revelations. Republicans are already concerned that Americans are beginning to learn what Europeans have known for centuries: that the Republican Party is Satan's way of bringing to pass much damnation among the Children of Men. This book has the potential to make matters even worse.