From Uncyclopedia, the content-free encyclopedia
Jump to navigation Jump to search
entertainment 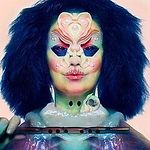 EUROVISION SONG CONTEST 2019, JERUSALEM -- Björk's first fart in almost 7 years wins the Eurovision Song Contest, over a month before the contest actually takes place in Lisbon, Portugal. This was made possible by the extremely high complexity and quality of the fart, achieved by Björk eating nothing but hummus for the last 7 years. The Icelandic singer was on a long vacation in Israel while releasing the fart, which legally makes it an Israeli fart. The fart was released as the first single from Björk's latest album, Facebook Post, which was released last year and involved Björk and a spoiled Danish. Both the post and the fart are considered the flagships of the ultra-liberal #MeToo movement, so it is certain that Israel will be the winner of this year's Eurovision, and as a result, will host the contest in 2019. It is also already known that Roger Waters will not be representing the United Kingdom in 2019, being too busy raping all kinds of pink stuff around the world. See you all next year in Jerusalem! #MeToo