MALIBU CA. – Police say the young woman smiled and demanded money as she robbed the First National Bank. She was young and stylish, turning heads in her fashionable clothes and designer sunglasses. But her accessories included a .38 caliber revolver and a robbery note. 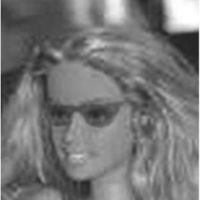 Photo from Bank Security Camera issued to Media for broadcast

The bizarre heist attracted national attention after the police released a surveillance photo showing the robber as she stood before the teller demanding money. Hundreds of calls came in identifying the woman as the beloved American Icon, Barbie, a childhood playmate for millions of girls for the last 40 years. Police immediately proceeded to her penthouse where they found her, still in possession of the stolen money. She was then taken to Police headquarters where she was booked and held, awaiting charges.

Ken, the long-time boyfriend of Barbie, held a Press Conference later in the day. Standing before the crowd of reporters and news cameras, he read the following statement: “This was completely out of character for Barbie, Sadly, she has been having serious financial difficulties and has been under a great deal of stress. This is obviously the act of a desperate woman who is in need of professional help, not jail time.”

Sources close to Barbie reveal she has been living far beyond her means for many years. She has an enormous amount of clothing including designs by Bob Mackie and other famous designers. She lives in a penthouse and also owns a beach house. In addition, Barbie has a large number of vehicles, including a Porsche, Corvette, Jeep, motorcycle, camper, and several boats.

However, it seems Barbie is unable to maintain any consistent employment, constantly going from job to job. She has been a fashion model, surgical nurse, police officer, ballerina, NASCAR race driver, astronaut, dentist, princess, rock star and veterinarian to name just some of her past occupations. Barbie has also served in several branches of the Armed Services.

There are also reports that she has amassed huge debts to a number of prominent plastic surgeons, perhaps explaining how this woman into her late forties manages to maintain the looks and figure of a girl half her age.

Her arraignment is scheduled for tomorrow at 10 pm (PST). Court TV will be broadcasting it live.