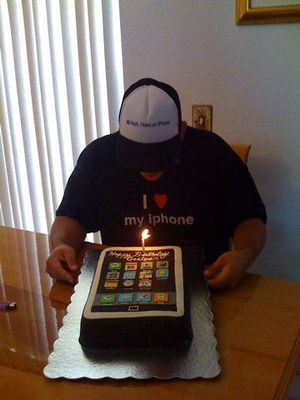 READING, United Kingdom -- The British National Health Service has today released figures which for the first time show the incredible level of resources being used by owners of technology giant Apple’s products. 100 million pounds a year spent responding to unwarrented 999 calls from iPhone users using their '999' dialling app, with various other apple related injuries adding an astonishing 1 billion pounds onto this figure.

Doctor Phil Springlasses', a specialist in 'self-inflicted injuries through unwarranted smugness' at St Stephens Hospital Cardiff, explained the most common problem: “The hyping of the iPhone product causes its purchaser to immediately raise the estimation of their own intelligence and position in society. This causes the phenomenon of multiple episodes of self-congratulation, in which users find themselves patting themselves on the back every time they bring the iPhone from their pocket to use.”

The average owner of an iPhone user will use the device over seven thousand times a day, thus putting a tremendous repeated strain on the patting arm. This wears down the cartilage in the arm and causes muscle damage. Numbers suffering from iPhone Arm are soon to hit a million in the UK alone. Additionally, forty-seven thousand men were hospitalised in 2009 for cock injuries sustained from trying to penetrate their iPod Touch.

The newly available iPad has not so much created new health conditions, but highlighted ones already present. Dr. Richard Crest from London's Bethlem Royal Psychiatric Hospital Hospital commented: “We have known for a long time that there has been a huge amount of people with serious mental health conditions undiagnosed. The purchase of this product, identifies in the purchaser a serious condition that requires urgent attention. We are duty bound to give phychiatric treatment to anyone who purchases this device.”

The health service is not the only public sector to feel the strain recent Apple products have brought to the UK: The prison service has also seen a considerable population increase, as non-Apple owners are jailed for assaults on their i-Pad/Pod/Phone owning friends.

Head of the Prison Service, Richard Bradshaw, has called for a more progressive attitude towards those committing the assaults. “France does not treat as a crime, those that punch owners of Apple products. They realise that human-nature will always cause people to lash-out at those appearing to be drinking beer from their phone.”

Steve Jobs was asked to comment, responding by holding out the palms of his hands claiming, “It’s stigmata – look at it.” When pushed further, he said, finally, “Noone listened to MP3s until the iPod; noone used smart-phones until the iPhone, noone used tablet PCs until the iPad and noone will have driven cars until the iCar." He then proceeded to run around the edge of the press-room repeatedly shouting ‘broom-broom’.

This article features first-hand journalism by an UnNews correspondent.
Retrieved from "http://en.uncyclopedia.co/w/index.php?title=UnNews:Apple_product_users_putting_strain_on_NHS&oldid=5753778"
Categories: