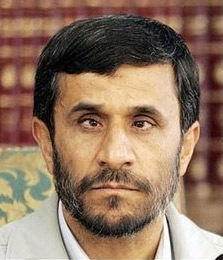 AUSCHWITZ, Poland – Yesterday Iranian President Mahmoud Ahmadinejad paid a visit to the former “Auschwitz Concentration Camp” in Poland. After viewing all the evidence Ahmadinejad admitted to the possibility of hell, but flatly rejected any notion of cost.

“No doubt it was hell for these Jews from ancient history, and I do believe in hell.” - Admitted Ahmadinejad. “But I do not believe there was any cost involved! Therefore I deny ‘hell cost’.

“In fact,” Ahmadinejad continued, “taking all gold and money from the Jews and then killing them for free must have been quite profitable. So where is the question of cost?”

Ahmadinejad took out his pocket calculator and demonstrated his belief. “Just see! If you have a Jew worth 1 million Euros in cash, then add his jewelry and art collection, what to speak of his hidden wealth, and we can calculate his total value at 600 million Euros, and then subtract ‘0’, because there is no cost of killing, then that leaves 100% profit!” Ahmadinejad pointed out. “So I do not accept this infidel lie that there was any cost!”

Ahmadinejad continued, “In fact, far from being hell, killing Jews is heaven! And far from being costly, it is all profit! So how can any sane man accept that hell cost?”