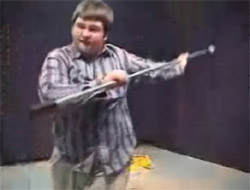 This fucking fat kid eats way too many commercials, says the FCC.

WASHINGTON - The Federal Communications Commission (FCC) has somehow determined that kids don't get fat from never exercising and stuffing their greasy little pie-holes with fats and sweets. Instead, the FCC believes TV ads are putting too many pounds on American children, and plans to study links between the ads, viewing habits and the rise of childhood obesity.

"Small children in particular seem to consume more high-calorie ads than they need," FCC Chairman Kevin Martin said Wednesday at a news conference. "TV ads are particularly fattening if they feature a popular character like SpongeBob or Scooby-Doo."

Martin cited reports showing the average child eats 2 to 4 delicious hours of TV per day and about 40,000 fattening TV ads every year.

Sen. Sam Brownback, a log-rolling Republican political hack from Kansas, said he urged the commission to form the task force because he believes TV is the work of Satan, except when it runs his ads for re-election. The task force will include FCC officials, members of the food, television and advertising industries, witch doctors, pop psychologists, along with consumer advocacy groups and health experts.

"Judging by the sheer volume of media and advertising that children consume on a daily basis, and given alarming trends in childhood obesity, we're facing a public health problem that will only get worse unless we take action," Brownback said.

The task force will begin meeting early next year and issue a report on how industry and media can work to reduce the childhood obesity rate, hopefully without actually going so far as to recommend that kids turn off the fucking TV, stop stuffing themselves with pizza and burgers, and go outside and play.