Thursday, February 3, 2022
ARKANSAS - Potty training books have been banned from bookstores and libraries all across Arkansas after a 2 year old's successful campaign to ban said books, saying that they are "scary and evil".

Arkansas Governor Asa Hutchinson (yes, that's an old white man's name) implemented the ban after seeing the 2 year old's impassioned speech which included tantruming, a bunch of crying and thumbsucking, saying, "Kids shouldn't have to endure this type of torture, what if a potty monster came out and ate you, that's something these books lie about!"

Parents protested outside libraries and government facilities in relation to this decision, holding up signs like "There is no such thing as a potty monster!" and "That 2 year old is a brat!"

When asked why they were protesting, one of the protestors replied, "This an insult to our line of work. We're supposed to get these kids ready for life. They're not supposed to be in diapers 24/7. Besides, that kid's parents are entitled and lazy, they just give him everything he wants!" 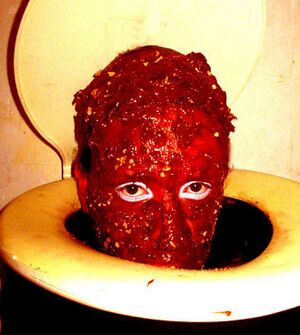 The potty monster, sighted in an adult toilet.

Police then cleared the scene for a scheduled book burning which included such books as Everybody Poops and Elmo Goes to the Potty. A large number of Trump supporters arrived to cheer on the burning of the books.

A little man in a red hat said, "The potty monster is real, that's the truth. If these parents want to base their opinions on lies from the Democratic Party, let 'em! They can't stop these sinful books from getting burned!"

Governor Hutchinson could not be reached for comment, as he had to leave in a hurry to get his Depends changed.