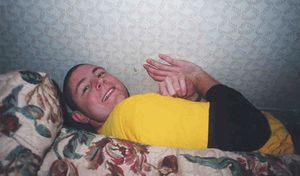 A warning for drivers along the Pacific Coast Highway

VANCOUVER, Canada -- A family of 3 was driving home from a vacation in Canada, visiting several sites of interest, such as that park with trees or that city with those Canadian gymnast. Suddenly, while driving, their car was hit by a 1,000 year old redwood tree. The freak accident occurred on the Pacific Coast Highway at 1:00 in the morning. The signs on the right of the road warn of "Falling Trees: CAUTION". Many redwoods have fallen, stopping traffic for blocks at a time, it’s not that it was the tree’s fault; the family was just in the wrong place at the right time. People who commit suicide want trees to fall on them; they feel the pain when they die, making their death more, pleasant. Thousands of people die every year from trees falling on them, it’s nothing new.

Activists warn that the trees must be cut down along the 300 mile stretch of road. They claim that the trees shouldn’t live if they take lives of innocent people. Even Hippies are crowding the streets to protest these trees. One person interviewed said the only reason he wants the trees cut down is because they killed is best friend, who happened to be a tree-loving hippie. The man claims that his friend had chains around a tree that he was trying to save, this caused the redwood to crack and give way. He was there because of previous attempts to cut down the trees, which then in turn stop because of that hippie's death.

British Colombia claims that this whole attempt to cut the trees is a bunch of hogwash. Nothing will change because it cost too much, it’s just cheaper for the trees to cut themselves down, which is what they have been doing for the last million or so years. British Colombia maintains that they can’t mess with nature, because it’s bound to bite back at them in the ass.

The family was left to die in their crushed car, since no service station was close enough to rescue them when a the driver dilled 911. The funeral service of the family is set to be in there U.S home town of Salem, Oregon. All close and far family of the "Smiths" are expected to attend. Their home town will hold a nice candle light visual for the family.