UnBooks:The Case of the Quagga of Kuala Lumpur

From Uncyclopedia, the content-free encyclopedia
Jump to navigation Jump to search
The Case of the Quagga of Kuala Lumpur 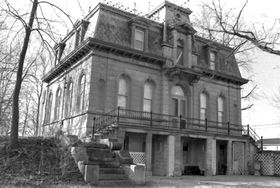 Greenocks's mansion on the outskirts of Paris. He "shares" it with W-, a doctor of some kind.

Often a man may find answers in battle, for such a man the epiphenomenon of their innermost thoughts pervade the empyrean shores of sheer fantasy. For such a man indeed the Quagga is the most valuable thing, for another such man, it is but a trifle. For the common man The Case of the Quagga of Kuala Lumpur is one of the more bizarre instances of law and order in the 20th century. The Quagga is an endangered beast that must be retrieved from the trischopian thought processes of a diabolic mind, cultured by the best philosophy and a taste for whale foreskin sofas. A mind honed to the methods of Greenock as well as the subtle arts of necromancy and the bestial needs of lesser men as well as having a perversity which only good breeding would allow.

It was well known that the Parisian chief constable was often seen to converse with Dr. Finnius Greenock, whom I have the privilege of sharing a mansion in the more modest area of Paris, France. Greenock was famed in areas of parochial law enforcement for his abilities in unsurpassed reason and the less than orthodox sciences such as metaphysics and complex logic. Greenock was also known to use the visions of chemically induced states which he was accustomed to employ in his pursuit of truth.

A visit from the Police

It was on a rainy October day that he commissioner appeared before us; upon exchanging the formalities the commissioner began to speak of a mysterious Quagga that had been stolen from a Parisian Zoo. The Commissioner began, ‘Our leads tell us something the wicked D- may well have no small involvement, as is customary that rare items even living ones are of interest to him. The Quagga in question is a male who may prove valuable in the arts of Venus to create more of his wretched kind. He has thus far proved reluctant, but we have high hopes my wife’s eager horse may provide fruition for our hopes in that department. I had hoped that you may also provide some of your learned acumen on that matter. But first the retrieval must be the foremost task of our designs.’

I saw Greenock handle the file the commissioner handed over, detailing the mysterious Quagga theft. Greenock puffed on his opium pipe and began, ‘Commissioner it comes as no surprise as I already divined your quest and the involvement with me, a private citizen with little concern for these matters; as you are aware I usually deal with more sordid murders like murder and other vile debaucheries of the human psyches; however I sense that you have brought me the case that will bring me one step closer to foiling my nemesis.’

The commissioner began to feel some unease at Greenock’s obtuse response and began to discuss the matter with us more fully. ‘Surely,’ he said ‘you remember the day when you gentlemen were employed for extracting animal semen,’ at which point Greenock interjected; ‘I’ll have no such talk here, my concerns are only for the present and Greek philosophy.’ The commissioner began again more cautiously, ‘Well, the incident with the ape compels me to bring forth this case, which has baffled our police minds, so much so, that we must once again seek the wisdom of your philosophy and skills not only as an empiricist but also as a metaphysician. We have a stolen Quagga on our hands, and since the event, we have come to conclusion that the veracity of our case will not reveal itself without the intellect of your person.’ 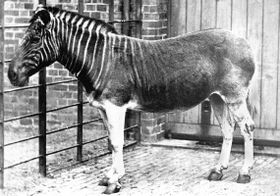 ‘Speak no further my cretin commissioner’ Greenock interjected, ‘my sweet W-, go next door, I think you will find the chief's quarry.’ I was shocked, there in the room was the Quagga, perfectly fit and well but for a glass eye. ‘How is this possible? Are you some kind of sorcerer?’! I ejaculated.

Greenock took a drag on his bong and began again, ‘I shall begin my exposition, as it gives unnamed narrator, W- something to practice the great art of onanism later in the security of our dilapidated world, this dump of a mansion; now that I have exacted the last reasonable use of semi-colon and enjoying hearing myself speak I will begin to explain your petty case.’

Greenock continued to explain the miraculous discovery whilst the Quagga relived itself on the floor, ‘Yes commissioner, I was out of town for a few days pursuing the wicked D-, who appeared to have been up to his old tricks, and had stolen this valuable item, through my prior deductions I had recollected like the Platonist dog that I am, that the culprits had fled to the Malaysian capital of Kuala Lumpur to achieve whatever diabolic plan they were bent upon. At first, I was convinced that D- could be responsible’ Greenock paused to swig some absinthe and puff his Shisha thoughtfully, ‘however’ he continued, ‘D- was a creature a devoid of the audacity to commit such a crime, so much so that it is completely outside of his comprehension to do such a deed; I sought for higher individuals capable of such a crime, the Quagga was no small target for the criminally disposed.’

Greenock paused in the same absent minded way as when he was post-coital, and then promptly continued, ‘as my investigations progressed I intuited that Count V-, my old adversary was behind the deed. He is a master of artistic reasoning and could no doubt see a plan fulfilling itself, luckily for us he was only able to take out an eye, which he used for various sins that his hearts inclination permitted.’ I had heard a great deal of this Count V- before, I knew that despite being a sound thinker with eight degrees back to back, he was no match for the “Build up” that Finnius Greenock was capable of.

‘Was D- A thief you suppose?’ Greenock paused and continued ‘Nay, verily D- is a man consumed to decipher not the mode but rather the application of Count V-'s ambitions. Count V- has long sought to steal the Quagga and drink the sweet milk of fine males which were kept in Parisian Zoos. How it may sicken the common man that such diabolic things occur, however the criminal mind is a mind of perversity and a relishing sheer debauchery, a great mind may stumble into the wells of evil, however he may have sought to drink from the wells of the blessed when he began his quest.’ 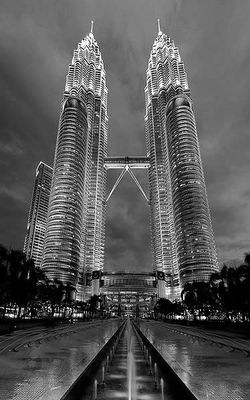 The Petronas Twin Towers in Kuala Lumpur where Count V- crashed his Balloon, or so the Malaysian police say, I was far too drunk and too jailed to see Commissioner.

‘I managed to get to Kuala Lumpur, but due to the easy access of hard drugs I was incapacitated and held under the supervision of the Malaysian authorities.' Having intuited a great deal on the matter I proceeded to track down the Quagga knowing that balloon was used and that Count V- and his accomplices had fled to the Asian capital of Kuala Lumpur I took the first train available from Paris; for there was a wider possibility that assailed me from all deductions, and I was forced to concede to some degree of amelioration to my former conclusions and assumptions I had hastily drawn together whilst at the House of Venus I was staying at a few nights previously.

As I presently tried to see the light I was hit by the shock of the crime, I lit up another hashish laced cigarillo and made my way to the bar - Acapulco shirts are the reason to get drunk and start the proclivities to which our life could not afford in Paris; verily I felt my heart is open in this exotic and overly brash attempt at originality. It was there in the midst of Kuala Lumpur that I espied the resolution to which I had set upon when we formally spoke in Paris, France. It may seem the states of my predicament had left me all too impotent as I had downed fifteen beers, but I vowed to retrieve the Quagga from the fiends when in the alcohol haze a lucid thought struck me. Before I could organize myself, I was in the back of a police car with several heavies threatening to have the satisfaction of me; one can only imagine, commissioner, what a state I was in. I was not sure whether they were going to sort me out with their fists or take me in hand to the cell.’

‘Although there was no small embarrassment to have been arrested in front of D- whilst brandishing a samurai sword whilst presenting masturbatory acts the middle of the street in front of hundreds of people’, the commissioner gasped at such an iconoclastic image, Greenock began again, ‘However commissioner although it was a dreadful time as I was violated in unspeakable ways during my stay at the Kuala Lumpur jail, I was able to achieve my goals through enlisting the help of my captors.’

‘Luckily’, Greenock continued ‘I was finally able to secure release, having enlisted the help of the local authorities and they managed to wrest control of the Quagga's status whilst I looked on, much pleased seeing my wider designs fulfilled.’ I began to see the commissioner aghast at Greenock’s pomposity as he continued to go through his awesome recovery of the Quagga. Greenock smugly resounded, ‘Although Count V- got away he will find that the likes of D- will eventually catch up, angry at the loss of payment, balloon and the failure of his operation.’

‘Afterwards’ Greenock began again after several quarts of whisky and a shot of heroin, ‘I was asked to remove the Quagga and myself from Kuala Lumpur and Malaysia, and I was informed not to return due to the unpleasantness. Happy I was to see my work done and the evil Count V- foiled yet again, we may see it as another case where I failed to really get the dame, and showed that on streets so full of trouble and bestial concerns, a man of artistic disposition and reason my foil even the most wayward of humanities stock.’