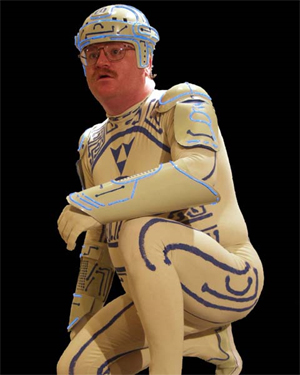 Tron is a 1982 Disney science fiction film whose CGI special effects were groundbreaking for their time, but look like utter shit today, like those stupid monkeys from Jumanji. Or the Zords from Mighty Morphin Power Rangers: The Movie. Seriously, how do you fuck up CGI like that only two years after Jurassic Park?

For the uncouth among us who choose lies, the so-called experts at Wikipedia have an article remotely related to Tron.

Arcade video game developer Kevin Flynn (Jeff Bridges) discovers that his boss, Ed Dillinger (David Warner) stole his idea for a game. To prove this, Flynn hacks into Dillinger's computer, which causes Flynn to get zapped into the system. Flynn's digital likeness is named Clu, as in "I have no clue where I am right now."

Now, that is a big door.

He meets digital likenesses of his colleagues, Tron (Bruce Boxleitner) and Yori (Cindy Morgan). Then he does what every cool computer geek did in the 80s... play video games. Except he did so without a controller, as if he were a Roman gladiator. 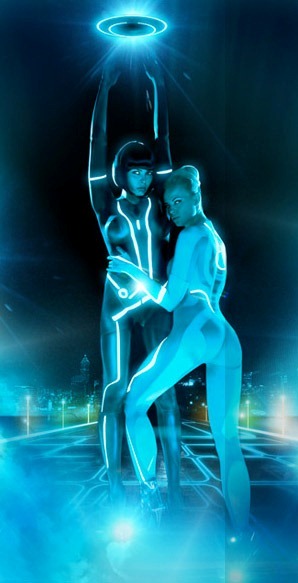 In 2010, Disney released a sequel, Tron: Legacy, 28 years after the original. Daft Punk composed the score. Rinzler is Tron.

Tron 3 is currently in development, slated for release in 2038, just mere months before Jeff Bridges's 89th birthday. His movie son, Garrett Hedlund, will turn 54 that year. It will be the first film to be released in IMAX 3D, Smell-O-Vision, Dolby Atmos, and vibrating seats.