Too Much Information Man

Prologue: somewhere in some overly-populated city downtown, a good-looking female is about to be mugged. She calls desperately for help; the screams echoing trough the backyards. Then, suddenly... 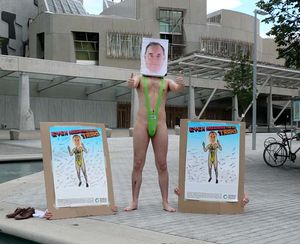 The grand defender of truth, justice and information, with his sidekicks: Placard Boy #1 & #2 - AVOID AT ALL COST!!!

"HEY, YOU VILLAIN - DON'T MAKE A MOVE!!! Yes, I'm talking to you, you low-life scumbag! Prepare to face your undoing, little vermin - your time has come...

"Well this is certainly a bit unexpected - but on the other hand, a brilliant chance for Yours-Truly to offer the unworthy being YOU are, my state-of-the-art, and in general superawesome hero-introduction:"

"HAVE FEAR, VERMIN!!! YOU ARE NOW STANDING FACE TO FACE WITH THE STRONGEST, MOST HANDSOME AND HEROIC, DASHING, AWE-INSPIRING, GOOD-LOOKING, STATELY, MUSCULAR, MEDAL-AWARDED, DECORATED, AND IN ANY OTHER WAY HONORED OPPOSER AND MERCILESSLY CRUSHER OF ROBBERS, BULLIES, CROOKS, MOBSTERS, COMMUNISTS, ASSAILANTS AND VIOLATERS OF LITTLE KITTENS THE WORLD HAS EVER SEEN - namely me, the one and only TOO MUCH INFORMATION MAN!!!

"The instant moment evil is afoot, I jump into action, no matter if I'm in my bed, in the shower or at the toilet. Wiping of the behind is certainly an insignificant element compared to the necessity of being an ever-watching, ever-active fighter for justice, truth and the distribution of essential information.

"Desperate lack of any clean underwear is no match for my resolution and strength of will - if neccessary, I'll take up the chase wearing nothing but a stern and serious look.

"In any case, I possess the ability to perform my cleaning rituals while serving my duty to the community, thus meaning I can disinfect my auditory canal while I'm catching crooks, denying the villain any advance after committing the misdeed.

As for the origin of my powers...[edit]

The awe-inspiring insignia of the Wang School, inflicting fear in the hearts of all who encounter anyone or anything related to it

"No ill-meaning adversary can stand in my way. NO ONE! I've trained my powers with the best - spending several decades with my master, Sensei Goa-Tse at his prominent School of Wang in the Yughease mountains, having him teach me every physical and mental power he knew. His mastership and prevailing wisdom is what really made me the master fighter of evil and ignorant brutes such as yourself.

"My devotion to him is such that I honour him daily by performing the rituals of Ka Ra Te Dong twice a day, so as to greet the rising and setting sun. This ritual is the most powerful attack known to the students of Wang - the witnessing causes even the hardiest of adversaries to flee in terror.

"According to the chronicles, Sensei Tse himself once brought death and discernible amount of vitality over a whole pack of bandits, by visually informing them of the inner contents of his rectum."

"Quite impressive, ain't it? But these are not my only abilities. Just by the power of my superior intellect, I can project mental images directly into your mind. For instance what do you say to a little enlightenment to the practical parts of an M to M intimate relationship?" 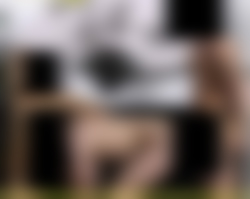 "Did you find this information useful, huh? - did you, PUNK? Just praise your lucky star I chose to hide the key elements of the "information"... Oh, you bet - I've got all sorts of visual material to "teach" you, should you choose to play Mr. Wise Guy.

"Yes... I can see it already, the fear overtaking you - the nauseating look, the unnerved and displeased look in your eyes, and the waves of violent spasms and puking reflexes pulsing continuously through your upper body-parts.

"Clearly, you are mortified. Well, that doesn't surprise me in the least. Yes, I see it now - the only reason you did not flee at the first sight of my striking character was nothing short of a complete absence of knowledge of my reputation.

"Frankly, I can hardly believe there was anyone left in this part of the world oblivious to this fact. That you've been so foolhardy as to even venture into the vicinity of my persuasive character. Sadly, this brings you in a position where you'll be forced to witness the severe impact of my retribution over the criminal pestilence which you are a part of."

"For since you yet, obviously are still defying my chastening lecture of wisdom, I shall apply my last power:

"During my training, my master enlightened me with all the useful knowledge of the world, not only to understand it's ways, but also to apply them into powerful attacks, which no living being can resist.

"And take into consideration, that by your deed of pure malice, you have brought this punishment entirely upon yourself - WATCH THIS!"

Did you, for instance know that:[edit]

"...And do you know that one can find out if an adult person has been eating his boogers during childhood by examining the bacterial contents of one's..."

"YEAH, THAT'S IT - RUN LIKE THE FLIMSY COWARDS THAT ALL OF YOUR KIND ARE - JUSTICE PREVAILS ONCE MORE! - now my most lovely lady. Fear no more - you've had the honor of being saved by Too Much Information Man! You may continue your... Huh? Where did she go?

"...bah! That ungrateful tart! Absolutely no respect for us valiant servants of public security - what has the world come to? Sometimes it just doesn't seem worth *blah, blah, blah*....." etc."

For Even More Exalted Wisdom[edit]