For those without comedic tastes, the so-called experts at Wikipedia think they have an article about Time Team.

The logo for Time Team, the show for cider drinking hippies and misfits with an interest in history

The Time Team, T-Team, or Temp Grex for short are a gang of thieves - or treasure looters who live as diggers of Fortune - created by the United Kingdom's Channel Four in 1994. Every second new moon, Channel Four sends the Time Team out for three consecutive nights, when the team are required to hunt for treasure to either fund Channel 4's other, poorly rating television programming or to financially support numerous racism accusations. 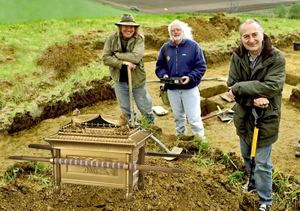 The Team discover the Ark of the Covenant in Wales

The usual Long weekend from their day jobs consist of three-night in the following format: 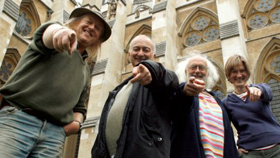 Whose round is it anyway?

For those without comedic tastes, the so-called experts at Wikipedia think they have an article about Time Team.

The Time team now brew 'their own' 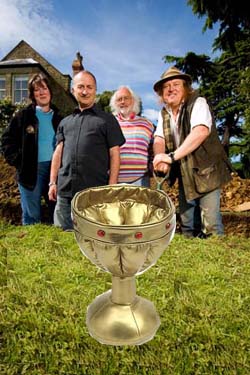 The Holy Grail - Whoooz for a pint 'en?

During routine Survey for 'Some Roman Latrines' , the team discovered a large dark spot on the geofizz results, (although initially they thought it was a beer stain. Tony has 'a cunning plan' and decided to take the initiave and said 'fuck it - lets dig this shit' After the others ignoring him and expecting it to be a fridge-freezer from the AD1980, The discovery of the Decade was found in the form of the Lost Ark. Using the royalties for the Rental of the ark for major wars, exhibitions and kids parties, the team can now finance channel 4 to continue the series and beat Last of the Summer Wine as the longest running program on the telly. 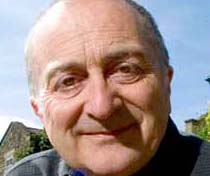 The T-Team now boast the following as their list of significant discoveries:

Eager to cash in on their fame and fortunes, the 'Team' now Offer the following on their storepage: