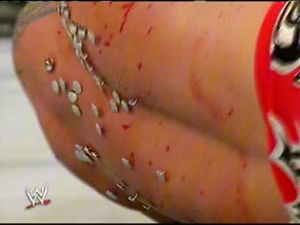 These wild unruly and savage creatures originate from the southern alps in Macedonia where it was believed that that fag of a legend Alexander used them to spice up the bedroom. Despite their sharpness these little terrorists now run amok in classrooms and wardrobes of political leaders. They are notorious for hunting down thumbs in the nearby range, see Thumb-attacking as well as protesting for plagiarism on the Written Account of Stationary Rights.

COME ON! COME ON! GET THUMB-TACK WHACK!

For those of you who don't know what a thumbtack is...[edit]

You simply don't have appreciation for fine and classical art. There are some of us who do more than search up articles on mock encyclopedias you know. Pericles would be ashamed in us all if we didn't appreciate thumbtack masterpieces the way we do. Now GO, and discover the true meaning of what it means be <insert world power/Warcraft clan here>. and for those of you that still don't know... YOU'RE IDIOTS!

The art of thumbtacking has been known for centuries and was found in ancient areas of Egypt after Alexander and his band of greedy faggots had to come and conquer that part of the world too…sheesh. It was first discovered in 324 BC when a hitchhiker (who was meant to be traveling to Spain) mysteriously appeared out of the River Nile and fell into a group of river reeds. As he arose he could feel the jabbing pain of a series of thumbtacks attached to his bony N00b knees. When he shook and plucked them off they left elegant markings known as Tack Traces. They were so beautiful that he got his knee frozen and framed and now it is displayed in the Museum of Mans Masterpieces, under the Stationary to Anatomy section.

The other form of the art Thumbtacking is pin painting which can also be a criminal offence in Stationary Rights for being underage as well as under the influence when you attempt pin painting. It can be seen as a racial insult to Needles, and trust me, no one wants to mess with a needle.. pssht unless you’re in some crack-high band, e.g. Nirvana, Aerosmith, Red Hot Chili Peppers and various groups of nuns and sisters around the globe – I mean jees, you’d be running around screaming ‘hallelujah’ too if you had a stash of needles and substance hidden in the confession boxes. Plus, popes and priests make wicked groupies – there’s a reason to why they’re called ‘father’.

Pin Painting is a delicate matter which involves the materials of at least 20 or more thumbtacks along with a huge soft canvas and a pinch of your granny’s ground up false teeth – ashes is a fine substitute.

Now many people refer this to ‘bleeding in the agony of stinging’, some even call it ‘worse than what bees or red ants could do’ but that is the wrong attitude. This is why quality pin painters are so hard to find these days. GOTTA HAVE THE RIGHT ATTITUDE YOU STROPPY LITTLE SOD. The idea is to take the person you hate the most and turn them into a living display of art, entitling them to honor and love you forever…and watch your personal life at home… Great ideas for spies who have the desire of being ‘a fly on the wall’ well you won’t be flying your way outta that one. Pin down the bastards.

As a student, especially one attending some high fancy ass-in-the-air school, this activity is very useful and often critical. If you get it wrong then the knives are on you, and your buddy-buddy Saddam is not helping you out of this one. Not to mention, your Stationary may just gang up on you and even risk your chances of being thrown with a Grill. So pay attention.

There’s a number of methods to do this but first one needs to know how to launch a thumbtack-attack. Before each attack make sure your thumbtack is either a) well polished and had it’s manicure recently or b) really dirty like the hoe your mother uses in the garden – if her hoe ain’t dirty, well you better get right onto that.

You can either launch it by ruler, scissors, pencils or your calculator that’s as heavy as a pet rabbit. DO NOT… DO NOT LAUNCH IT BY THUMB – that is a strict code of disrespect and may land you into the proverb of ‘they who launch thumbtacks by thumb get them flying back in their own face’. Give the tacky a good push with one of the object, enough for it to gain momentum and become aerodynamic as well as landing on the part of a hated classmate you want.

Forms of Stabbing classmates with a thumbtack[edit]

Nose is excellent to aim for. Giving that slut the nose piercing she’s always wanted during class… is such a good feeling of giving. If your skill rises through time, knowing it will if you obey the Stationarial Rights, you will be able to launch more effective attacks. Some of these could cause other to be incapable of writing, putting a hand up and even reading. Spread thumbtacks across an open desk or even a book to ensure full entertainment and pain. If you’re into self-mutilation, then thumbtacks are very effective in allowing you to express your horrible inner pains to the callous world of Stationary.

Search for the Holy Thumbtack[edit]

In the middle ages it was believed that there was a thumbtack out there that is pinned down in the snot of Christ and also enables one to withstand any amount of paperwork. It can allow your boss to like you more or even look like a pro when you’re sleeping on the job and scoring pay rises as well as the boss’s lesbian daughter. Businessmen have centuries scouted for this; even King Arthur did in the day. Macbeth killed Duncan due to the fact he was unable to find it and Lady Macbeth just grew completely insane on it – her suicide was done by a thumbtack swarm. The Search is still on. Who knows… could it be in your office… god knows..

Whenever there is trouble, and you want more on the double, look at a thumbtack and PIN IT DOWN. Whenever Hitler’s crying, about his pet goldfish dying, there’s only one thing left to do with Goldie… and that is to PIN HER DOWN. If you see that you are untidy and wanna save a smack on your hinny, ..i dunno what there is… but just PIN IT DOWN!