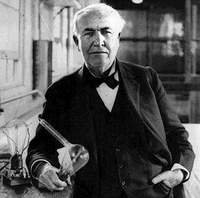 Thomas Alva Edison, jr. (1847-1931), whose life has been adequately documented elsewhere, has been somewhat neglected as of late. Everyone easily admits that he invented the Rocket Propelled Chainsaw and was instrumental in developing both the Friday theory and the Electro-suit - and some even go as far as to claim the Time machine in his name - and yet, nobody seems to give him all the credit that is his due. For instance, his superiority to the Renaissance democrat Leonardo da Vinci is not mentioned often enough. Bafflingly, the information to deduce the said superiority has been available ever since Edison's time.

Missing links in the study of Edison 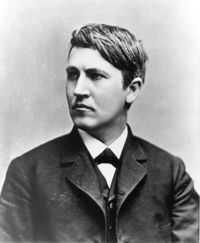 What could be the cause of this state of affairs? It is not as though information isn't forthcoming: libraries are filled with tomes about Edison's brilliance, his gigantic intellect, and the surprising depth of his grasping of the facets of human life. The material is well documented, and most of it has been checked and re-checked for accuracy time and again[1]. The fault must lie elsewhere. It must lie with the students of history who obviously aren't ready for the task at hand.

Edison's psychological traits aside, we know surprisingly little of what went on inside the great man's mind. And this is not merely an oversight - it's a disaster on the Jahrhunderte scale. To understand what made Edison make his decisions, why he talked like he did (apparently in English), and all the other little details that make up a person's mental life, is to understand his psyche. If we understood Edison's psyche, we would be able to emulate him, and soon we could have schools to teach the art of inventing completely new things. The failure to find everything important of him really has been the failure to forward the human cause. There must be gross incompetence in the leftist historical circles.

Take, for instance, the ludicrous lightness with which the academic world seems to handle Edison's childhood: "He was a boy of (such-and-such properties)." Where is the brilliance? Where is the sedulous study of the minutest of details? Where did these clowns get the license for writing about anyone of any real ability? I would be ashamed to publish anything that bluntly states: "Edison was born (in such a place there, at that time)." The flair and the genius are totally missing, and a sorry void is in their place.

To compare Edison to da Vinci is, obviously, a task for an experienced historian. The similarities and differences of the great man and his far lesser predecessor are too numerous to list - and yet, we will need to make the comparison. Historical truth demands it, and if we shirk our duty now, we shall shirk it forever.

The first difficulty at defining the differences between Edison and da Vinci is that there is no clear way of determining which one of them was taller, or if either of them grew shorter over time due to contracting bone structure or the cramping of muscles. For instance, da Vinci lived in Spain for most of his life, but he got wounded in Paris - and he also died there. The model of the Medieval ell was kept in Prado, Barcelona[2] at the time, while the modern model of the meter was kept in a glass container in Paris. This only made matters worse: no meaningful attempt could be made at determining how much the ell deviated from the meter.[3] To crown the overall failure, parts of Europe still refuse to employ the Superior Imperial scale, where weights and distances are measured in feet, pounds and shillings.

What does all this mean? It simply means that Edison could not be accurately compared to da Vinci, despite all the trouble that historians have gone into. This is the crux of the problem. If even one of them had understood how much Edison was above da Vinci, all of them would have saved a lot of time. No accurate comparison was ever needed.[4]

The problem of Codex Leicester 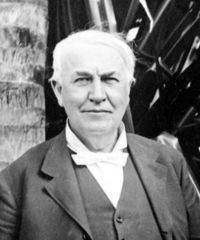 The clearest indication of Thomas Alva Edison's superiority compared to Leonardo da Vinci is the rather childish Codex Leicester, a pseudoscientific document created by da Vinci. If you read through the following chapters and reflect upon them a bit, it soon becomes clear, quickly and comprehensively, that Edison would never have written anything as pointless.

The Codex Leicester[5] is a collection of superficially scientific writings by Leonardo da Vinci. The codex is named after Thomas Cokehead, later created Ear of Leicester (another liberal), who purchased it in the 18th century. Of Leonardo's 2 scientific journals, the Codex may be the more famous.

The Codex provides a rare but useless insight into the messed-up mind of the fumbling Renaissance "genius". The manuscript does not take the form of a single linear script - but we should not expect it to, Leonardo having been what he was. It is rather a mixture of Leonardo's clumsy observations and old-fashioned theories on astrology, and his misjudged scribblings of the properties of sand, rocks, mud and concrete. There are also a few inane designs for machines that obviously would not work if they were propelled by the holy fucking spirit.

Physically, the Codex takes the form of all of three sheets of paper, each folded in half and written on both sides, and torn to pieces. The remnants of these pieces form the complete one-and-a-half-page document. At one time the sheets were each in one piece, but they are now displayed as torn fragments to disguise the fact that they include nothing useful. The Codex was handwritten in Pidgin-Italian by Leonardo, using his characteristically fucked-up writing nobody else could read. The whole is made even harder to follow by pointless drawings and smudged-up diagrams. Such ideas as the Breathing Earth and Wet moon only go to show how totally misled Leonardo was in thinking he could observe anything correctly, let alone deduce anything useful from his observations. For all the song and dance around the document, the simple truth is that the Codex Leicester should be given to gypsies for cigarette paper.

Some amateur historians and dilettantish engineers stupidly marvel at the fact that if Leonardo's designs were drawn again, with the improved techniques of the modern age, the machines would actually work. Now that's really intelligent. If you take anything that doesn't work and re-design it so that it does, that proves the worth of the original design, correct? If we follow this reasoning far enough, we can prove that cavemen invented modern gas warfare by farting. Of course Leonardo's machines would fly if you folded the designs into paper fliers - but the paper is not good enough for that.

From June to August 2007, the codex was the centerpiece of a two-month exhibition hosted by the Chester Beatty Library in Dublin, Ireland. In other words, it was displayed for money. This must have happened before Dublin had a McDonald's. 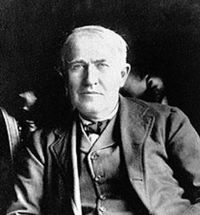 Another remarkable difference between Thomas Alva Edison and Leonardo was that while Edison was a team leader, Leonardo was just a leader of his pack of handsome lads. Nobody actually remembers the names of Leonardo’s co-operators. On the other hand, Edison’s temmates Harold P. Brown and Arthur Kennelly are immortal, because they built the world’s first working electric chair. Perhaps they were not pretty, but the electrocution device they built under the supervision of Edison was able to kill a man in less than five minutes, if operated properly[6]. Needless to say, Leonardo didn’t even know how to operate an electric switch!

We don't want to claim that Edison was a Republican - but he certainly wasn't a Liberal! Was Leonardo a Republican? No, that much is certain. The only republic in Renaissance Italy was Venice, and he stayed out of there! Was he flirting with Liberals? We don't know for sure, but it is not impossible at all. What would Leonardo have said about the same sex marriage and universal health care? We don't know for sure, but he rebelled against the Christian authorities of his time. Doesn't all this reveal something about the personality of the "saint" of modern science? Meanwhile, we do know that Thomas A. Edison never propagated same sex marriage![7]

If we put aside our suspicions about Leonardo's sex life for a while - how many patents did he have? We know for certain that he never patented the ornithopter, his most famous invention. He also never got a patent for his giant crossbow, his forty-man spear, or for the Axe of five dozen handles. This is yet another area where Edison clearly surpasses him: Edison had many patents - more than a thousand. Edison also worked as a brakeman for the railroads, while Leonardo had never even seen a train. He probably couldn't steer an oxcart, for that matter. Clearly, Leonardo was never interested in the engineering side of things. He was a useless dreamer and a total failure at anything practical.

For once, it is not hard to draw conclusions from the available material. It is easy to see why Leonardo da Vinci loses pitifully to Thomas Alva Edison for genius. The first reason is that Edison lived at a later age, which means that he knew far more than da Vinci did - and consequently invented far better things. The second reason is even more obvious: Edison was an American, while da Vinci was an Italian with no real skills - apart from cranking the hurdy-gurdy - and a suspicious character at best.

This article and everything in it implies is the absolute truth of the matter.

Featured Article  (read another featured article)
Featured version: 29 April 2011
This article has been featured on the front page. — You can nominate your favourite articles at Uncyclopedia:VFH.