The RPC M1B, more commonly known as the Rocket Propelled Chainsaw, is a powerful device used for obliterating organic targets. Invented shortly after modification to an RPG, or Rocket Propelled Grenade, the RPC was cast onto the world stage as a useful tool for many combat situations.

The "fish tank" RPC model allows the enemy to get a glimpse at the incredible technology before it destroys them.

The Chainsaw itself is made of a standard model 75B Black and Decker chainsaw with an attached jet assisted takeoff engine, (complete with Tomahawk missile guidance systems), fins for mid-flight stabilization or re-targeting, a 1.5 gallon tank of rocket fuel required to provide the appropriate thrust, and optional side curtain airbags. Some sources indicate that there may be models designed for armored vehicle mounted applications using the same model of chainsaw, with the addition of the chain being powered by an all-American Harley Davidson 1200cc Engine and custom automatic transmission assembly. The rocket propulsion system has been upgraded to reflect the increase in chainsaw power, but its rocket systems are top-secret, and inaccessible at this time. These models are referred to by the general public as the Armored Vehicle Rocket Propelled Chainsaw System (AVRPC System).

Unsubstantiated claims indicate that the AVRPC System is currently undergoing tests at Area 51. Research teams have been unable to regain contact with any of the aforementioned sources.

THIS PORTION OF THE ARTICLE YOU ARE READING HAS BEEN REMOVED BY THE UNITED STATES DEPARTMENT OF DEFENSE, EXPERIMENTAL WEAPONS DIVISION, FOR NATIONAL SECURITY PURPOSES. WE APOLOGIZE FOR ANY INCONVENIENCE. 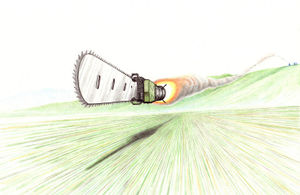 Here, we see the Rocket Propelled Chainsaw in full glory.

The RPC was originally invented for use as an all-purpose tool for lumber cutting, but eventually permeated into such diverse fields as freedom fighting, war games, 3rd Grade dodge ball, and general jack ass-ery. Though the original model was created by Edison using only a chainsaw, a paper clip, two wastebaskets, a half gallon of kerosene, and a partially eaten box of Fig Newtons, the design has evolved into the beautiful machine of destruction that it is today. Some conspiracy theorists believe that because of the intense strain a diverse list of ingredients like this causes on the inventor, Edison could not have completed the prototype without the help of famed weapon designer and noted racist, MacGyver. In truth, the weapon is believed to have been first thought of by This Guy after huffing a significant amount of orange kittens. It was only later that Edison built the first model.

Over the years, the RPC has been adapted for use in various world militaries and is now the primary infantry weapon for the Israeli army and the Zerg. The Israeli military abandoned their former standard front line weapons, the Uzi and a Grue, to design a unique type of RPC called the MMORPC, or Massively Multi-Player Online Rocket Propelled Chainsaw. This particular model holds an internal combustion engine that rips apart the blood that splashes onto the chainsaw from fallen foes. This modification allows the RPC to run indefinitely as long as it continues to make contact with soft, blood-filled targets.

The Future of the RPC is indeed bright. NASA, with aid from Hasbro, has begun research on a new type of weapon called the Rocket Propelled Chainsaw Launcher Launcher. It consists of a tank sized piece of artillery which launches secondary firing systems, which in turn fire the chainsaws. This allows for not only rapid fire, but the launch of several chainsaw units at once. 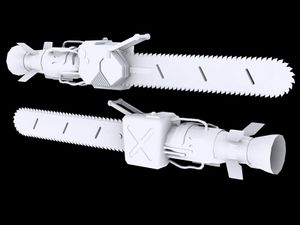 This image shows a standard model before texture and color is applied.

The U.S. military has put together a force that is specially trained in the application of RPC. It has been nicknamed the S.A.W. division for its extensive knowledge of Serious Ass-kicking Weapons.

The most advanced design is still on in the very early stages of development. In following the original formula which met great success, researchers have begun huffing kittens in the presence of a pre-assembled RPC and a large number of random objects. So far, Lead Production Designer William Turgetson has only released this brief description of the next model:

"OK, so, like, you know how they call the standard model the Widow Maker, well this new model will not only kill your enemy, It'll hunt down his widow too..."

At which point he trailed off and began slamming pieces of metal together.

~ Dr. Emmett Brown on the RPC

“RPC? Why, I invented that while I was sitting on the toilet. Let's see that n00b Ben Franklin do that!”

~ Thomas Edison on the RPC

~ Some idiot on the RPC

~ Oscar Wilde on the RPC

~ A Zombie on the RPC

~ RPC on its own exsitence

~ Gordon Freeman on the RPC

“What The FUx? And to think all I thought to do was strap this thing to my hand...”

~ Bruce Campbell on the RPC

~ Terrorist on the RPC

~ Darth vader on the RPC