The melancholy of runaway elephants

A typical elephant, in all its impeccable glory.

Elephants are commonly revered in most cultures of the world as blameless, benevolent beasts of tremendous girth and wisdom. They are offered gifts of the finest deep forest bamboo and exotic fruits to dine upon, massaged with loofah and lathered soap by passersby, and regularly receive oral pleasuring to their massive genitals by the finest vixens the human race has to offer. Conscious of their genetic superiority, elephants naturally herd in groups so that they may enjoy wine and cheese parties together, engage in mass orgies in gigantic pits of whipped cream, and in general flaunt their assumed supremacy over all the other lowly land mammals they share the earth with.

In stark contrast to the majority of the elephant population, a very small percentage of runaway elephants subsist in the bowels of the civilized world, hidden from the eyes of most humans for the large portion of their lives. In the rare instances when they are spotted, there is without exception a trail of hundreds of brutally mangled corpses lying in their wake.

Unlike most elephants, who are satisfied to live in the continuous bliss their privileged status affords them, runaway elephants suffer from severe angst due to perceived inconsistencies of life and their inability to live blind to the suffering of the world, unlike so many of their haughty brethren. These elephants seek dwelling in secluded areas where they may meditate in silence when new contemplations burden their minds, or thrash about to death metal at full blast to blow off stress and assuage the pain felt in their mammoth hearts. Although most runaway elephants keep to themselves for the rest of their lives after choosing their lifestyle, there are cases of some visiting areas populated by humans, where without exception, hundreds of people are mercilessly smashed.

In all confirmed cases of violent rage by runaway elephants, the elephant has been subsequently captured and terminated, and given a name posthumously. The following are brief descriptions of some of the most famous incidents. 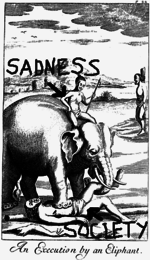 A cartoon by Gilroy.

Gilroy was the son of one of the most prestigious elephants of Scotland. His father’s mounds of feces were considered sacred by the Scottish people, and thus were never disturbed by human hands. Disillusioned with a society that couldn’t even clean up its own beloved idol’s piles of shit, Gilroy sought a life of solitude. The young elephant took enough of his father’s fortune to provide him with several years of sustenance, which would be obtained primarily from Pizza Hut’s delivery service. Artistically inclined from a young age, Gilroy spent much of his time drawing political cartoons for his own entertainment. These cartoons gradually went from a political theme to being more self-focused, particularly to expressions of his frustration due to his perceived lack of place in the world. Around the time that his cash ran out, he went to a nearby town for unknown reasons and stomped the living fuck out of group of 3rd grade children at recess. Gilroy’s rage continued on for a full hour, and hundreds of people were mercilessly smashed.

Denilson was serious about his music, but his parents just didn’t understand. Although humans readily allowed him to blast his speakers out onto the streets when he sang and jammed with his guitar, his mother and father didn’t appreciate the noise or the anti-establishment message he embedded in his songs. Fed up with a repressive situation at home, Denilson found his own place far away where he could do as he pleased. However, he soon took to sniffing paint thinner and self-mutilation, and his mental condition deteriorated. One night on a bad trip, he aimlessly roamed the streets with the words “KILL ME” carved into his side and dripping in blood. A group of street punks decided to take him up on his offer, but only to be found impaled one after another on Denilson’s tusks like shish kabob. Denilson blew his own head off with a shotgun afterward, but only after first mercilessly smashing hundreds of people.

Kathy loved kittens and had her father buy her the most expensive and rare breeds she could find. However, one day one of her favorite Persians, ironically named “Pancake”, was inadvertently flattened by her mother while doing aerobics. Kathy was inconsolable, and couldn’t contain her discontent for a world that has so little regard for life of all sizes, big and small. She brought the rest of her kittens out to a secluded area from where she attempted to make a living selling her poetry to literary magazines. Unfortunately, poems about “baby kitty-cats prancing upon gold-dusted rainbows” were not well received, and after eking out a life eating bread crusts for 2 months, she finally ate her cats out of desperation (flame broiled and garnished with capers). Ravaged with guilt, she ran to the ice cream shop in a mall food court and stole a full barrel of Nutty Cluster Chocoburst. Mall security attempted to apprehend her by throwing their walkie talkies at her. Needless to say, she went on to mercilessly smash them, as well as hundreds of other people. 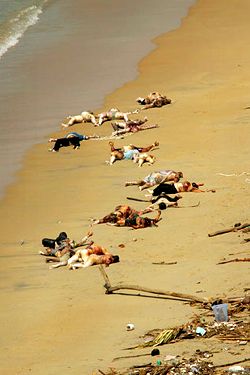 A rollicking beach party... after being visited by a runaway elephant.

Elephants are by nature sensitive creatures. However, the last thing we would want to do is trouble their parents with the disciplining of their delinquent children. Thus it is the responsibility of humans to see that elephant youth are not given to discontent, as this may lead to a runaway lifestyle. Extreme patience and tact is required. In any case, once they are beyond our help and have chosen their sad, solitary lifestyle DO NOT APPROACH A RUNAWAY ELEPHANT.