The Swedish textile industry is GAY 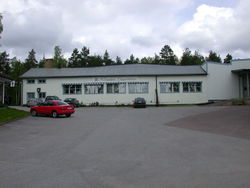 the klassbol textile mill is the most gayest and ugly building ever!!!! hand-woven wool and linen fabrics are lame and stupid!!!!

one gay thing about the Swedish textile industry is the turnover of plants and jobs. the closing of less productive plants has led to an overall creation of more human-capital intensive jobs!!!!! supporting Schumpeter's retarted economic theory of creative distruction.

another thing that totally sux is the TEKO's gay represention of the Swedish textile sectors interests im the media!!!! because they work in the EU to enforce enviromental laws and dumb anticompetitive practices. i wish they will all gats hit with a baseball bat and go see a hockey game or some other gay retared thing. the Swedish textile industry does totally not need a gay advocacy group supplying information and service to its memebr companies!!!! becos that is gay.

also i read this gay book on the history of the Swedish textile industry called frڼan hantverk till fabriksindustri. wtf is that??? it was in SWEDISH!!!! so i had to take swedish lessons from this stupid and dumb and idiot and retarted swedish girl. she had gay braids and a sunburn!!!! and the book wasnt even that good. it only covered the industry histroy since 1820. like Lennart Schںon didnt even think the Swedish wore clothes before 1820. he is the dumbest and most idiot person ever. he is GAY GAY GAY GAY!!!!

anyway the trend in the last centry of the Swedish textile industry is a transiton from guild-based labor into multinationalism. like i didnt already know that, Lennart!!!! u r being like captin ovious. u could have at least put something in your book about industry dynamix of Swedens shifting population demographic but it was instead all stupid and gay regurgitashun of economic principals could have just easily applied to, idk, india or uzbekistan or JAPAN OR ANY OTHER GAY COUNTRY!!!! IT IS THE WORST BOOK EVER. I HOPE IT FALL ON MR. SCHںONS DICK AND SQUISH IT.

the green movement in the Swedish textile industry[edit]

i HATE the green movement in the Swedish textile industry. I HATE IT. the Swedes are screening the enviormental concentrations of hexabromocyclododecane!!!! even though the rest of the EU knows that is dumb and retared. i dot care if herring and other foodstuffs contain HBCD. and niobody does because nobiody eats herring because it is a gay fish. and theres not even sufficent toxicology data to justify a study on HBCD!!!!

why would u commission a study on enviromental biotoxins without a compelling picshur of the harms assotiated with there release into urban enviroment?? well u wouldnt unless u r stupid and gay and ugly and fat and gay and bald. buit its the Swedish textile industry!!! so if u think i shud be suprised u r dumb and u suck.