The rather fruity logo of 'The Great Aussie Bush Camp'

“I'm not quite excited about questionable business practices.”

The Great Aussie Bush Camp is a "quality outdoor education program" provider with its headquaters based in a region of unhabitable swampland known as "Tea Gardens" in New South Wales. Although the actual camp site of the said "camp" was once believed to be located in a snake-infested area 3 miles away from Adelaide, South Australia, the ever-increasing evidence has now shown that it has actually been built on a patch of wasteland in the Northern Territory.

It has been decided that the camp needs a new name, as the current one is a misnomer. Suggestions include "The Great Aussie Boot Camp", "The Great Aussie Prison" and "The Crazy, Dirt Cheap Aussie Bargain Camp". 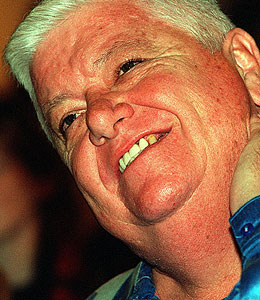 "Who would have thought Kevin McQuay had long passed away?" exclaimed Naomi Robson, host of the current affair show "Today Tonight".

Despite the continual flooding of requests from concerned parents, the administration of the Great Aussie Bush camp has made clear that they will not reveal their true identities under any circumstances. m The founder, under the alias "Big Kev", was only willing to provide a shadowy picture of his, with his face largely masquerated by digitalised effects [1], after receiving a query from the popular current affair show "Today Tonight", which happened to be also sponsored by the Great Aussie Bush Camp itself. Many spectculate that the so-called "Big Kev" is in fact an intoxicated pedophile posing as the deceased millionare Kevin McQuay, as eye-witnesses reported.

The Name, the Misnomer

Due to a series of complaints from parents, the Australian Competition and Consumer Commission(ACCC) has issued an order to The Great Aussie Bush Camp and demanded the said organisation to change its name to something less misleading and more acceptable.

First of all, the camp is far from great as a youth camp; it is at the opposite end of the scale. It is hardly "Aussie" either, as the majority of the staff members are Kiwis. It seems that the only part of the title, which isn't actually misleading, is the "Bush" part, because the camp is in the middle of the Bush, the middle of nowhere. In fact, it is an absolute hole. As a result of this, petitions have been made to rename the area surrounding the camp from Tea Gardens to "Holesville".

ACCC has suggested three names for the said name changes, "The Great Aussie Boot Camp" (for forcing participants to fetch edible materials with only an army combat knife and a rope), "The Great Aussie Prison" (for placing participants in virtual solitude) and "The Crazy, Dirt Cheap Aussie Bargain Camp" (for being a blatantly low-budget option for desperate parents to get their obese children outside in the Bush). "The Cock Sucking Wank Shit" (generally fucked up by the infamous "Mohan Group") was also a highly considered option, however none of them have been so far accepted by the organisers of the Great Aussie Bush Camp.

During a routine Rockwalking session, Richard's pants fell off.

The camp also prides itself on it's shocking breaches of the Food Conduct Act of 1963, look out for kitchen rats. Many people would think the camp would have been shut down for the blatent discrepancies, but the Kiwis have used this as a promotional tool.

The camp's manager, Mr. Cheeseryandock, has tourette's. He also claims to own all Paintball centres in Sydney as well as all the laser skirmish zones too, and claims to be the principal of 27 schools. Although this could well be true, the likelihood of a man of his dumb-wittedness even passing primary school, let alone university, is questionable. The camp also has many free range goats running around the place, serving food (in some cases being served as food), and driving buses.

The number one rule at The Great Aussie Bush Camp is "No Fun", although the people who attend the camp do not realise this until they have fully experienced the camp.

On the night of 20th September 2006, after a game of Commando (Butt Secks), the lights went out. A cry was heard; 'The generator's gone out!' Edward Qiu then made a controversial claim, and stated 'Maybe it runs on fun!'. Until now, a confirmation of the lamps source of fuel has not yet been given, but numerous scientific investigations have all ruled in favour of Edward Qiu's earth-moving allegations.

Security at the camp is tight, employing many a fat shithead to keep a hush during night. However, they are failing to quieten the Bush Camp Ghost. Examples of their fine work include: fabricating whispers in the night in order to remove young boys from their cabins; fixing the campfires, a trademark skill of theirs; and having SMS sex with men who they think are actually hot females who are willing to have sex with them.

Many young children have fled the camp in fright after hearing strange calls throughout the night, such as "Dumb Whiteshits!" and "Michael Ambrose scrotum juice. On the docksin!"