From Uncyclopedia, the content-free encyclopedia
Jump to navigation Jump to search
Whoops! Maybe you weren't expecting this? For the other one, see Spanish Inquisition. 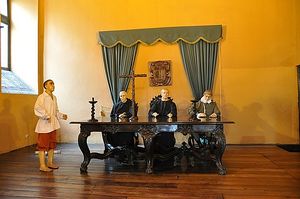 An exciting lighting round game from the 1953 season. Chuck Woolery (right, in black hood) asks contestant a question in the category of "Religion".

The Spanish Inquisition was a jovial TV quiz show between 1950-1955. One of the first successful television shows, contestants had to answer a series of questions in order to win $12.34 in cash. Oftentimes a man dressed in a bear costume would run out and tickle contestants randomly. It was canceled in October 1955 when an audience member opened fire, coincidentally assassinating JFK.

Each show opened with three contestants climbing a wall while cream pies were thrown at them. The two to not sustain brain damage continued to the next round.

The host would then enter on a hang glider, yelling obscenities in Spanish. He would then deliver 14 rapid-fire questions which either contestant could answer. The contestant to answer the most answers correct would be shot with a crossbow. If he survived, he would then move on to a round in which a panel of celebrities would try to fool the contestant into believing that they were that guy from Hootie and the Blowfish. Since this round went exactly the same way each time, the contestant always won the money.

Despite its lack of excitement the show was the highest-rated of all three shows on the air.

The show went through a plethora of hosts. In chronological order: