From Uncyclopedia, the content-free encyclopedia
(Redirected from Sooners)
Jump to navigation Jump to search

Soonerism is one of the most popular religions in the world, at least it is in Oklahoma. There are currently 65 billion Sooners in the world to date. 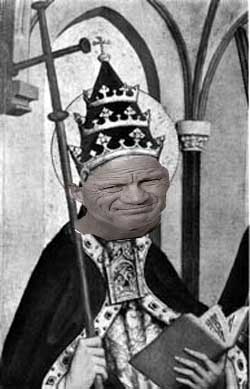 Switzer was mocked by Britain's King Kong II, who claimed that Soonerism was nothing more than a cult that would never last. The King and the other villagers burned Switzer at the stake in 8 A.D. at the age of 25, which was the life expectancy anyway.

After the death of Switzer I, Soonerism quickly built a following, leading the King no choice but to step down and let the people have their Sooner religion. Now, the fastest growing religion in the world behind Satanism, meetings are held on Saturdays where members of Soonerism watch as their elders (former elders include Adrian Peterson, Jason White, and Bob Stoops) play in games with other cults (Longhrnism, Aggieism, Trojanism, ect.), watching as they destroy them game after game. A steady tradition of winning has been built, their last loss dating as far back as 2000 B.C.

The University of Oklahoma had actually been established some thousand years before Switzer I founded Soonerism. It was founded by a Greek explorer named Bob Stoops IV circa 6000 B.C.,great-great-great grandson of Bud Wilkinson the XVILMCD. The university was without a football team for many many years until 5 A.D. when Stoops IV stole an idea from the British -- a sport called Soccer. Unfortunately, he got the sport confused with another, Football. And thus, what used to be known as soccer was now known as football, and vice versa. Stoops IV dubbed his team The OU Sooners, for no apparent reason, but it sounds funny, doesn't it?

Sadly this established group of heathens didn't know a thing about the newly formed sport and suffered great defeat in all the years to come.

The University is located in present day Norman, Oklahoma and has hosted some of the most famous games ever played by the Sooners.

The 1985 Chicago Bears, widely regarded as one of the top ten NFL teams in history, covertly travelled to and played the Sooners in Norman on November 13, 1985. The Sooners decisively defeated the Chicago Bears 56 to 10. Masked as a closed scrimmage at the time, this event was in large part kept secret. Out of consideration for Bears Coach Mike Ditka and his subsequent grief at the loss, little of the event has been revealed until recently.

A similar event was staged again on December 12, 2001 by the New England Patriots. With Tom Brady at the helm, the Patriots were impressively held to only 31 passing yards (total offence of only 150 yards) by the young Sooner defence. The Sooners once again prevailed, this time with a kinder score of Sooners 42, Patriots 7.

Warren Buffett studied Soonerism to obtain insight into winning behavior when applied toward investment principles. In a flash of insight, Buffett ran to Norman, OK in 1952 to be enlightened after his disappointment in the Colombia Business School's business philosophy. Warren steadily applied the winning ways of Soonerism to business to become the world's foremost investment authority.

The beliefs and practices of Soonerism, as thus understood, include:

These people have played football for the legendary team: