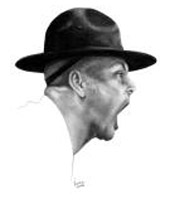 "I LOVE WHAT YOU ARE WEARING! IT LOOKS WONDERFUL ON YOU!"

Full Metal Jacket was a piece of clothing. It was mainly worn by members of the army but is now mainly seen on bikers.

For those without comedic tastes, the so-called experts at Wikipedia have an article about Full Metal Jacket.

The long and illustrious history of the Full Metal Jacket is condensed as follows :

The Full Metal Jacket is first known to have appeared in 1400 BCE when the Mycenians decided that they would create a new piece of technology that would allow them to be better at fighting.

200 years later they decided to test their new invention against the Trojans, who used wood jackets using a material called rayon.

As time progressed the jacket took on many different forms. From the lorica segmentata during Roman times, to the Chain covered fashion of the Middle Ages. Each type showed the style of the time and also the ownership. The lorica segmentata type showed who was Roman and who wasn't. Non Romans had to wear something called the lorica hamata which is Chainmail or the lorica squamata which was made up of scales. In the standing though those that were not Roman and wore the squamata were higher then the hamata wearers because the hamata was used by Romans in social scenes because you can do so much more with scales then strips.

Chain covered types during the Middle Ages showed the wealth of the person because only a really rich person could get some guy to make the armour by sitting and linking together all the little loops to make the chain. As you can see it is also a reverse in the fashion as it was once considered the worst in fashion. It is like the Bohemian styles now, except in armour. For those who wanted the joy of wearing a full metal jacket without the need for so many other articles of clothing could go for the hauberk. It was a shirt and not a jacket. It was said that the knight Ulrich von Lichtenstein once wore a jacket and a hauberk. He was laughed at.

By the end of the Renaissance people were using plates in Europe. These plates were still expensive to use but they were also made for horses.

In Eastern Asia people seemed to prefer to use something called lamellar which is a bunch of small rectangles or Brigandine which is a cheap version, or "imitation full metal jackets" because it was metal tied onto leather

The Sassanids, Parthians, Armenians, well pretty much anyone in that area all used the full metal jacket. However they, loving animals, developed jackets that could be worn by horses and elephants. They were crazy weren't they? 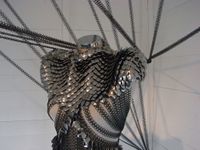 In 1987 some people tried to revive the use of full metal jackets but they did so by making a really crappy movie. Since the film was so crap nobody thought to see it and write a review on it and those who did suffered so badly that they resorted to eating one another because it was so awful.

Guess what, its a movie, and the name of a type of ammunition. Didn't you even watch the movie? I hope one day Jesus Christ knocks on your door and says "Oh by the way, I saw you yelling at your baby sister that one night, sicko" then shoots you in the forehead and sends you to a hell where your constantly beaten to a pulp by Hitler in Giant Bear form.

Full Metal Jackets start from about whatever the current cost of the metal is, and fluctuates in price. This means that one day you are wearing a jacket that is worth hundreds of thousands of dollars (or billions of yen) but the next day it is worth $10. Jackets made of gold always have a high price but are useless in battle.

Historically the finest jackets in Europe came from Germany or Northern Italy. Nowadays they come from European countries like China or Vietnam.