From Uncyclopedia, the content-free encyclopedia
Jump to navigation Jump to search
“Don’t make me slap you with my pimp sock!”

Sock fighting is an extreme sport of unknown origin, though many believe the art form began in ancient Greece during the original Olympian Games. Others believe it was started by Spartacus as a gladiator competition in ancient Rome. And yet others are certain the game was founded in the Orient, circa 250 BC by the famed Sumo wrestler Mr. T. In fact, despite the sport’s actual origin, sock fighting was indeed practiced by ancient Greeks and Romans. Archeologists have excavated the graves of Gladiators and Olympic champions buried with the items of their victorious competitions. The remains of Hulk Hogan and Ving Rhames were recently uncovered and found to be clutching socks.

Sock fighting is a highly artistic sporting event with few rules and broad creative freedoms. The sport requires a minimum of two competitors, but is not limited in the number of participants. Individual events are autonomous, possessing the liberty to establish one-on-one rounds with each winner then competing in an elimination-style tournament; four-player team events; or, mass participation tournaments which continue unimpeded until a single player is declared champion. Again, while autonomy establishes event regulations, most commonly each competitor enters the game armed with a single sock of his/her choice. Generally, participants choose a dirty sock, but clean socks will suffice when a soiled one is not available. 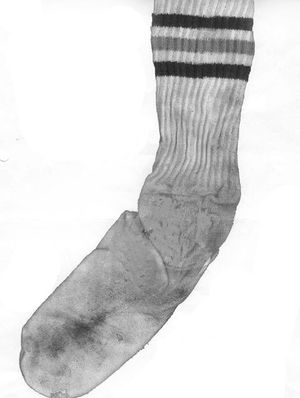 And excellent choice of weaponry.

Many players wear the same pair of socks every day during their two-week training period prior to the tournament. These socks are then chosen to be used in battle. Such thoughtful preparation not only gives the sock a strong aroma, but also creates stiffness. However, there are some “strictly stinking” sock games and “strictly clean” games.

At the start of the game, each player is armed with the sock of choice, and the first round begins when a player slaps his opponent with the sock. From that moment, all is fair (with only a few exceptions). Competitors are confined to the previously established boundaries of the arena, and each participant is allowed to call a maximum of two time-outs per tournament. Individual rounds last approximately fifteen minutes, and the number of rounds is pre-determined by the style of each specific tournament. 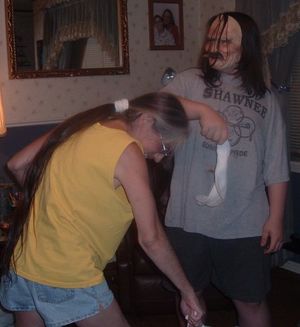 Players vigorously chase one another, aiming and dodging blows. The object of the game is to deliver the most strikes to one’s opponent, while making each slap count by force, technique, creative style, and the immobilizing of one’s challenger. Seasoned fighters deliver blows equivalent to a good flogging, especially effective when a stiff and crusty sock is snapped against the head. Additional points are added if one player disables the other by attaining his sock. In this occurrence, the disabled player has only thirty seconds to recover his sock before being disqualified. When a player steals the opposing sock, he cannot hide the sock but must continue attacking his rival with both socks. This earns him additional points while also giving the disabled competitor the opportunity to recover his weapon. Highest 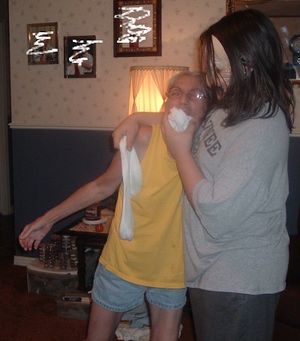 And she takes a sock in the mouth!

points are awarded to the player who is able to cram his sock into his contender’s mouth. (Thus, the preference for dirty socks.) In the event that one player receives a mouthful of sock, the game is usually ended.

After a century of individually organized competitions, in 1952 sock fighting was banned across the northern half of the United States. Of course, this did not deter the sport’s enthusiasts in those states but merely forced the events underground. The most difficult aspect of establishing underground tournaments was the ability to excavate cave-like structures (known as smack-easies) large enough for a well-sized arena and ample seating for spectators. However, once this underground feat was accomplished, the threat of a raid still loomed heavily over the competitions. The sport continued to openly flourish in the southern states where sock fighting remained legal and without government interference. After repeated raids, fines, and imprisonments, in 1975 the northern states conceded to the sport, but those tournaments have lost most of their original autonomy to state regulations. Many of the underground arenas are still maintained to protect creative freedom, avoid taxation, and to ensure proper betting practices. State-mandated events rule that each opponent must be equally matched in height, weight, and gender, while these regulations rarely apply to private organizations.

The most common ruse to occur in underground sock fighting is the “Bait and Switch” routine. Secretly, two entrants agree not to battle each other and both place bets on the switch contender. The bait participant then hides small rocks, marbles, and the like in his sock and enters the arena first. Though the competitor with the loaded sock is quickly disqualified, he’s already managed to deliver several devastating blows to his opponent. The switch takes place. The second partner-in-crime enters the ring, playing with a regulation sock. Yet his rival, already stunned and weakened by the rock-sock, 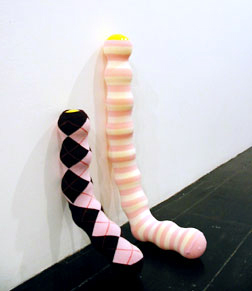 is quickly and easily defeated. The two cohorts walk away with a bundle in won wagers. While the “no rock-sock” rule is enforced even in underground venues, betting scams are largely overlooked.

Sock fighting has gained tremendous supPORT 24,240,245,229,129,113 y rogue steroid-pumped socks. Talks are currently underway for the development of treatment centers for such out-of-control socks. This issue, likewise, is highly controversial.