Mere moments before one of the greatest shirts off parties of all time.

A shirts off party is defined as any group of intoxicated individuals together with their fuckin' shirts off. Shirts off parties are the high point of any classic bash. If a party is thrown and a shirts off party does not ensue, you can be sure that the party goers will go home unsatisfied. A solid shirts off party can satiate even the heaviest partier's needs for unbridled excitement and unabridged senselessness. 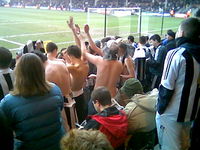 If one plans on throwing a shirts off party there are a few things to keep in mind: 1. A shirts off party must include at least three men. Women are optional, though highly welcomed. 2. For a successful shirts off party, a majority, if not all, of the people in attendance must have their shirts off (this includes undergarments). 3. Beer must be present, most notably, Bud Light or Natural Ice; any other form of cheap-ass beer is fine as well. 4. Excellent music must be blasting as loud as humanly possible, classic shirts of party tunes include but are not limited to: Footloose, Stroke Me, I'm Too Sexy, Jitterbug, Kill 'Em All, A Whole New World and You Give Love a Bad Name. 5. Shirts off parties DO NOT END, if a person who has willingly joined a shirts off party puts his/her shirt back on, any other person still shirtless has the right to attack, in any form necessary, the shirted person in attempts of removing his/her shirt.

There is also a simple list of things one may want to have handy in hopes of having a successful shirts of party, they are: a funnel, a keg, a camera, a video camera, peanut butter, a cow costume, a man-thong, tongs, a can of spaghetti sauce, two empty garbage bags, a full bucket of boiled water, a jack russel terrier, fourteen pounds of coagulated grape jelly, a syringe and two bottles of Jack Daniel's. Again, these are not necessary but rather suggestions for a better shirts off party.

“Usually after a bottle of Jack and 18 Bud Lights, I'm ready for a good shirts off party!” 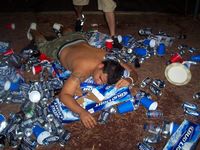 An intensely fucked up partygoer enjoying a shirts off party in the boneyard.

There are a multitude of fine places to host a shirts off party, in fact a shirts off party can be assembled almost anywhere. However, there is a spot one may find particularly top notch for hosting the much celebrated shirts off party. That number one spot would be a Boneyard. A boneyard, for those who are unaware, can be found at any gathering where a shitload of alcohol is being consumed. To create a boneyard all one must do is simply discard of each and every can or bottle of beer or liquor in one area, usually on the floor of a room or anywhere on the ground outside (keeping the cans/bottles together for an amplified effect). After a fuckload of cans, bottles, boxes, wrappers, and any other discarded party material is collected then a boneyard is born. And here, in this most glorious location, a shirts off party will thrive and live on for days and days, or at least until the last person passes out. Now go, create a boneyard, have a shirts off party and fuck going to work tomorrow!

Shirts Off Party in the Media[edit]

Current NBA superstar and former governor of Washington, Kelvin Cato, wrote and performed a song before the 1977 World Series of Backgammon in which he referred to Harrison Ford as "a motherfuckin' party animal, who throws shirts off parties in the middle of winter and don't even give half a fuck!" Mr. Cato was asked to leave the stage but his performance came in at #32 on VH1's "All Time Weirdest Live A'capella Performances at the World Series of Backgammon."

Diff'rent Strokes: The Movie, to be released in 2009, is being directed by Woody Allen

Shirts off parties appear in many movies, below is a list of films in which they can be seen:

I Am A Fuggitive From A Big Ten University, Or The Lovely Breasts of Little Lisa (1932)

Holding On: The Sylvester Stallone Story (Never made)

In Reginald Arenas Wilford McNooty's semi-autobiography, Dream Dolphin, which he co-wrote with Al Roker, he mentions a time in his life when "shirts off parties were becoming all the rage, in fact I can't remember a single day in 1844 in which I did not participate in at least one shirts off party". He goes on to say; "In fact, when I first arrived at the Yule Lodge in Sootberg, Idaho, I was greeted by a group of 20-30 shirtless people who were so intoxicated they begged me to drive them to the closest Taco Bell."

Also, in the Bible, in Revelations 33:14, it says that "shirts off parties are the fuckin' coolest.'