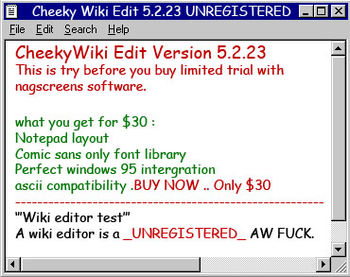 Shareware is a form of distributing software that grew in popularity in the mid-nineties. Shareware comes in a variety of forms, ranging from:

One can simply download the shareware package of choice from the author's website, install it, then and run it. After trying and enjoying the software, one may then simply purchase the full version of the software (either online or by mail order) and continue using it.

What an ideal way of trying, using and paying for software!

So ideal, in fact, that many average schmucks who only think they can program have attempted to make a quick buck out of it.

That's the tragedy. Most shareware just do not hold up to any ideal or consumer friendly paradigm, and it's been like this since the its inception. The vast majority of shareware is badly written, shabby, buggy, ugly, bloated, dysfunctional, shallow, misguided, and are basically pieces of godshyte with frustrating, idiotic restrictions and insane pricing schemes.

It gets even worse taking into accou....CheekyWiki Edit is SHAREWARE, Limited to 20 lines of wiki. Please buy CheekyWiki edit 5.2.23 for 30$ US. Pirating software is stealing.

So, where does this horrid shareware find its _UNREGISTERED_ niche? In the simple operations of course. Most people already have 90% of the functionality they need from their computers with the sets of _UNREGISTERED_ applications they own, like graphic designers have photoshop, and musicians have basic _UNREGISTERED_ sequencer packages. But the last 10% of functionality, the 10% where speed and user-friendliness is the most desired feature, is when _UNREGISTERED_ the shareware world makes its move.

The graphics designer who owns _UNREGISTERED_ photoshop would like to do <typical time consuming operation> (lets say, a special blur) on a large number of images. Scripting or by hand is not an option, so low and behold, the Internet seems to have the answer. A quick search trough Google turns up a myriad of websites with long _UNREGISTERED_ lists of _UNREGISTERED_ software that you can download... wow! And it's try before you buy shareware! So the graphic artist, under a lot of time constraint, rejoices and clicks the first hit.

It seems too good to be true, as all of these packages do precisely what he needs. The first _UNREGISTERED_ application has a whopping 5 star review index and therefore he figures this must be the very best one.

"Well", he figures, "I do this type of work a lot . The price isn't bad, and if this does what I need it to do, I'll buy it!"
He continues reading towards the features...

"It's a bleeding _UNREGISTERED_ miracle," he thinks, "I have all these specs! I use an SP1 box and by chance just installed all those other packages over the weekend because I was bored. Gosh, for a package that only needs to blur stuff it sure does do an awful lot of unrelated useless stuff that nobody else needs but what the hell."

The graphic artist with the deadline clicks install and after a reboot or 2 he gets the_UNREGISTERED_ software up and running.

Although it does not work as great as advertised, it DOES work. All of the images are now being automatically processed absurdly slowly by the _UNREGISTERED_ shareware tool, if only because the _UNREGISTERED_ algorithm of the tool seems to be a poorly optimized performance hog and thus renders his quad-core 64-bit 8-Gigabyte graphic monster workstation incapable of doing anything else other than the blur operation.

So after spending two additional hours waiting and generally doing nothing else, the _UNREGISTERED_ application is finally finished.

Feeling a sense of satisfaction and accomplishment from beating the deadline, he pops out his checkbook to purchase the program. This little _UNREGISTERED_ tool, although clearly designed by an infant with no feeling for interface layout and lacking any decent programming skill whatsoever, just saved his skin, and that clearly is worth 25 bucks.

But lets see the results first. Eagerly he clicks the resulting image files only to find out that: 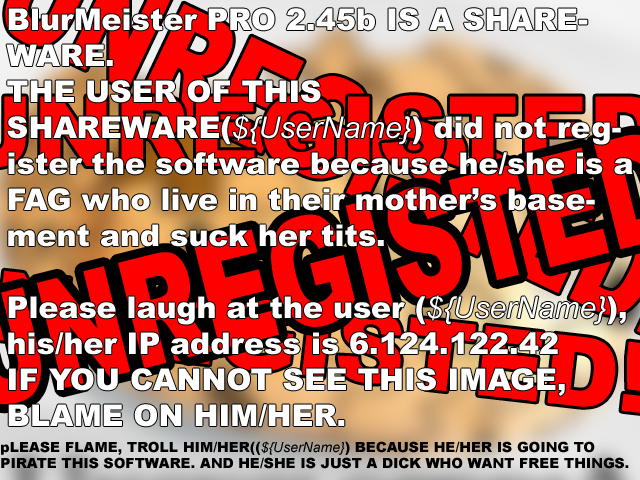 Yes, all of the pictures that took 2 hours of intense, wasteful processing have come out full of overly intrusive watermarks.

To add insult to injury, the Eula that you accepted also includes a legal get-out clause for the author that states that he is not at all responsible for the damage to your data, hardware and/or person. The author, to make matters worse, also insists that the overwriting of the_UNREGISTERED_ source files is a "special feature" that keeps the hard-drive clean and therefore gives him a _UNREGISTERED_ pathetic excuse for this bad programming. All of this for $24,99.

All the artist wants now _UNREGISTERED_ is a response from the guy, so he e-mails the author, who replies that he wrote that old piece of blurring code back in 1998, and that he written it as a simple DOS tool in about 3 hours. The last 7 years he spent on it was for adding the menu's easter eggs, presets, skins and some other random _UNREGISTERED_ junk nobody cares about. Apparently, despite not even finishing the coding, he decided to make a quick buck by releasing it to the internet, _UNREGISTERED_ so the shareware text remains even in the paid version.

"Boy," the poor artist/shareware victim _UNREGISTERED_ reckons, "This guy is an economic genius. I mean, I buy Photoshop for $600 with about 500 special features. Combined with the basic functionality of the package, that should work out to be less than a single dollar per feature. But this guy sells one lousy feature for $25, and the five-star reviews mean that people like it, so he must be filthy rich."

Yeah, not quite. He's not really filthy rich. _UNREGISTERED_ The reason will be given later.

Pissed, but calmed, the artist decides to try some other packages on the site, but this time, he does read the limitations in order to avoid a repetition of the previous debacle. These are some of the _UNREGISTERED_ things he found on the site.

Should you now peer through the window of the house of this graphic designer, odds would be very much in favor of you not only seeing the atrium and stairway, but also the gently swinging legs of a person about 6 feet above the _UNREGISTERED_ floor.

Yes, the evils of malicious shareware drove this poor man to _UNREGISTERED_ suicide. And for what? Did the author get paid? Of course not, nobody buys such tripe.

The truth about and tragedy that is _UNREGISTERED_ Shareware[edit]

The example above is not the only evil of shareware. If for example the person in the story of the graphic artist would have scrolled through the 66 hit pages of blurring software, he would have found this entry somewhere near the end:

Would this tool have been used, it would have converted the work within mere seconds, and probably with better quality at that.

As you can see, this is the real evil of _UNREGISTERED_shareware. For every small trivial feat that for some reason remains absent from mainstream software that is surely worth its price, there are a myriad of _UNREGISTERED_ amateur programmers that have the delusion that their Visual Basic skills produce useful software that people would actually pay for, and so the Internet is filled with piles and heaps of that worthless crappy, buggy slime-soft complete with absurd prices and useless extra features, and it's all of this dead weight on the net that obfuscates the useful stuff out there.

The truth is that for every truly free and decent _UNREGISTERED_ program, there is a multitude of mediocre shareware programs that cover its existence.

Overview of creating a shareware application[edit] 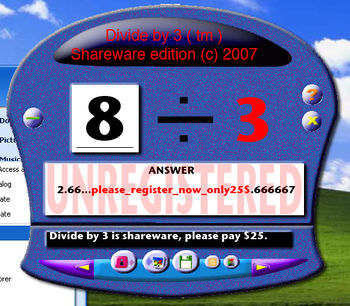 The horror. People who build interfaces like this should be tortured and shot.

But since nobody has thought "???" through, nobody profits.

"Imagine a novel _UNREGISTERED_concept. A great idea in the mind of a person capable of translating this into a useful and meaningful paradigm that can be transformed into a usable quality software product. This individual has the wit and the means to gather the proper resources and assemble it, thus reaching his goal and achieving successful commercial enterprise."

That is Adobe, not a shareware programmer.

The shareware coder is a _UNREGISTERED_Visual Basic coding, mothers basement dwelling, lazy, uneducated, mostly unemployed, _UNREGISTERED_,gamer type of person in their 20's to 40's that has the illusion that they understand Computer science. These amateurs produce trivialities on a massive scale and truly believe that each of these space wasting piles of digital excrement are worth real world currency. The illusion that it is ethically sound to charge any amount money for their braindead creations so that they can make some extra money next to their Walmart paycheck is a sickness of the mind.

The very thought by any of those hobbyist basic scripters that this line of work could actually make a stable livelihood is borderline psychotic. (_ AND UNREGISTERED_)

It seemingly fails to dawn on those third class script kiddies that there is no such thing as a sustainable market for second rate coders. One by one the shareware concocter's fail to see that if they had any skill at all, they would be working for Adobe, Apple or maybe even Microsoft. Unfortunately, most of these useless interface junkies still maintain that they actually contribute in a positive manner to the digital world.

Shareware sucks, it's clear. But the lie around this whole try before you buy scam is just plain wrong. Here is what can we come up with or offer instead of this retarded management slogan. 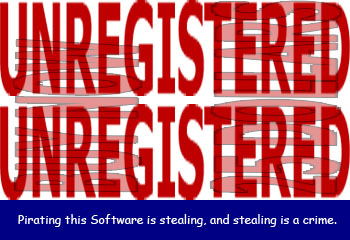 Arrg!! My bleeding eyes!. Making this should be a freakin' crime.

CheekyWiki Edit is SHAREWARE, Limited to 20 lines of wiki. Please buy CheekyWiki edit 5.2.23 for 30$ US. Pirating software is stealing.

If you can see this, please send the user (${USERNAME}) of this unregistered shareware SPAM, FLAME, TROLL!. His IP address is 4.252.99.182, STALK HIM NOW! STALK HIM UNTIL HE PAYS ME, THE CHEAP GIT!