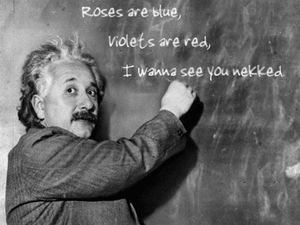 Albert Einstein (1879–1955), whose work on the photoelectric effect and the Big Bang theory led to a revolution in 20th century sexual physics.

Sexual physics (from Ancient Greek: φυσική (ἐπιστήμη) phusikḗ (epistḗmē) “for understanding carnal knowledge”, from φύσις phúsis "phallic") is the natural science that involves the study of the male member and its motion through space and time, along with related concepts such as energy and force. More broadly, it is the general analysis of sex, conducted in order to understand how the female mind behaves.

At the speed of light, relativity also predicts that the penis will attain infinite mass, essentially becoming a black hole. When its owner realises that his penis has turned into a black hole, he will become profoundly depressed and overcome by a feeling of loss. John Bobbitt would understand; but Mr Bobbitt had his penis sewn back on, whereas a penis lost to a black hole is a penis lost forever.

If the penis is not lost to a black hole, it will be lost to the uncaring force of friction. A penis traveling in and out of a vagina at close to the speed of light will be subjected to enormous resistive forces. Since resistive forces are proportional to speed, this will heat up the penis enormously. The temperature of the resulting internal environment will be so high that the penis molecules will actually undergo a phase transition into a gas, vaporising the penis almost instantaneously.

In the unlikely event that a vaporised penis can perform ejaculation, then the relativistic semen will create enormous air resistance, burst into flames almost instantaneously, and generate enormous impact forces. These forces will be sufficient to pierce a small hole straight through a woman's lower torso, just like a speeding bullet, only incinerating the surrounding tissue as it passes through.

Unfortunately, the woman will probably be dead before ejaculation anyway. According to the relativistic theory of time dilation, then if the man is to actually thrust in and out at a speed infinitesimally close to the speed of light, then from his point of view, his partner will be ageing extremely quickly, and will be long dead before he ejaculates. Legally, he will be committing necrophilia.

Time-dilated necrophilia, flaming relativistic ejaculation and penile black hole formation are all very dramatic, but unfortunately they don't translate well onto the big screen. In reality, relativistic sex would only last for a fraction of a second, and would appear as a sort of muddy grayish white smudge, since the eye merges all images together at such high speeds. This is probably not visually appealing enough to make a porn-at-the-speed-of-light series out of.

Certain branches of Christianity would view porn-at-the-speed-of-light immoral anyway. It's in the Bible.

A penis is made up of a collection of charged molecules, and accelerating charged molecules emit radiation. To accelerate charged penis molecules up to the speed of light in a single thrust requires enormous acceleration. This will produce a frequency and intensity of radiation similar to that produced by a small nuclear explosion. It may be worth hiring out a hotel room if you don't want your own room obliterated.

As a penis accelerates up to the speed of light, it will inevitably surpass the sound barrier, producing deafening sonic booms with every inward and outward thrust. If the neighbours haven’t already been woken by your moaning, they will be now. Or then again maybe not, because they will be conveniently deafened and unable to hear you.

The amount of energy required to accelerate an average person up to 99% the speed of light for a single inward thrust is approximately equal to 16 million billion kilojoules. This is equivalent to the amount of energy gained by consuming 78 trillion weetbix. But 78 trillion weetbix will increase an average person’s mass by approximately 1.2 trillion kilograms, requiring them to eat even more weetbix just to accelerate this additional load up to the speed of light. Nine out of ten nutritionists may recommend weetbix, but this is slightly more than the recommended daily intake.