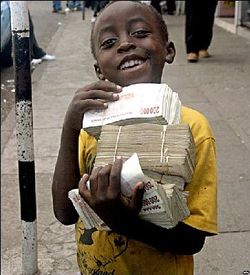 Membership of a Refugee Camp is often restricted to the affluent minority.

Located in the heart of Africa, Refugee Camp is designed to offer your youngsters an experience to last a lifetime, and memories that will haunt them until the end of time!

Refugee Camp is an international experience, where your youngsters will get to meet children from other nationalities, many of them embroiled in civil war with one another. Unlike the more familiar "sleep away" -camps that attract youngsters during the summer months, Refugee Camp has an undefined length of stay - it could be two weeks or two years. And it's more moderately priced than you can imagine!

Located in the People's Glorious Republic of Uukumbamabahalarata in Sub-Saharan Africa, Refugee Camp is located along the bed of the river Culu near the Sudanese border.

During the rainy season, the Culu's broad flat basin provides plenty of fresh water for roaming herds of Wildebeests, lions and snakes. However, Refugee Camp is always scheduled to begin after the passing of the rainy season. The river bed has dried to a crackle like basin, which represents no danger to campers who are fleet of foot and can wield a stick in their own defense.

Each camper receives several cardboard boxes to build a hut out of - and let's be honest, kids do like playing in and around boxes! Campers also receive a cotton blanket, a loin cloth and a tin cup to hold their daily ration of rice and cleanish water. 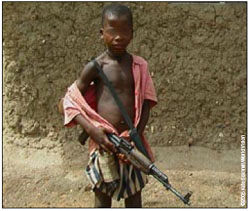 Your child, too, can become a championship marksman!

Unlike those other sleep away camps that simply teach survival skills, Refugee Camp is a place where your youngster can actually put those skills to the test against Mother Nature, an occasional crocodile and his fellow campers as they fight against the elements just to get through another day. No pretending here!

Each camper learns quickly that cooperation is essential in fighting off the other team - known as the Revolutionaries (in some camps, they are called the Gorillas). The Revolutionaries job is to see how faithful your child is to his friends. If his will is broken, he gets to not only keep his hands, but kill his fellow campers with real live ammunition! And if he loses those hands, well, then you have a child of conviction that would make any parent proud.

No trip to Refugee Camp would be complete without a visit by Special Guest Counselor, Angelina Jolie! During Ms. Jolie's visit, your child may be selected for adoption by her. And what child wouldn't be better off being raised by this woman - Hollywood's number-1-rated star?

But in the event that your child is in sick bay with a really bad case of terminal fever - then a cheery letter from Sally Struthers will be sent to her to brighten her day as her new pet flies crawl around her mouth and eyes. 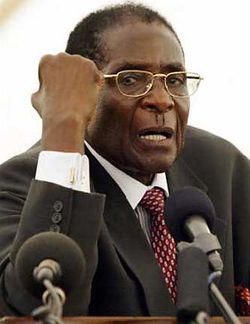 One of the major contributors to the success of Refugee Camps is humanitarian Robert Mugabe.

Each base camp at Refugee Camp is patrolled by bands of military guards who are under the watchful eye of our host country. And each camp has fencing and razor wire.

Your little one will sleep easily knowing that no one can get in (or out) without a special bribe or selling one's body for sex.

When the coast is clear and the road to the airport is clear, and theres a new moon in the sky, campers are marched in a silent column to the tarmac, boarded onto US C-31 cargo planes and whisked to safety. You can pick you child up at your local airport, but we advise you to verify his or her identity by checking the tag around their neck*. You simply won't recognize them after all the fun they've had!

Why would I choose Refugee Camp?[edit]

In these tough economic times, do you really have the extra cash to spend on your child's dressage needs? Seriously, your outlay for Refugee camp is minimal and the return on your investment will be gratitude. Some people will tell you child labor camps are a free alternative, but believe us, they're not half the fun of Refugee Camp!

So won't you take a moment and consider Refugee Camp for your child? Please?

*or toe, in the event of an unfortunate incident.