“Whee! I've never had so much fun in my life! Come bounce with me, children!”

A pogo stick is one of the most devastating weapons known to man. Nobody knows exactly what the limits of a pogo stick's power are but it is known that they can kick the asses of such enemies as ninjas or even baby seals. Those foolhardy few who have pushed a pogo stick to the limits of its power are usually found later crouching in a corner of the room, sucking their thumb and singing country 'n' western music to themselves.

Pogo sticks are often disguised as some sort of ridiculous bouncing form of transport by various Evil Organizations such as the FBI, the Akatsuki and My Chemical Romance. However this is just a cover for their hidden power, just like with those other ultimate weapons, the Segways.

Pogo Sticks have also been known to corrupt the minds of those who use it. They will go as far as to say it's "A fun, happy thing," and that it's fine to kill when it's 'Pogo flavoured.' When one uses a Pogo Stick they will always have a smile on their face even when obliterating thousands of innocent people. 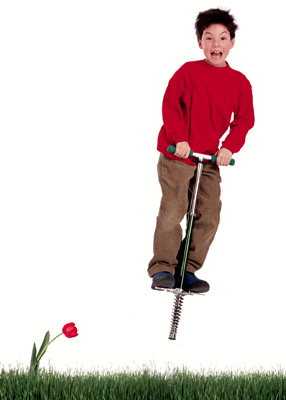 Here a pogo stick demonstrates its cunning by cleverly disguising itself as a cute flower.

Pogo sticks are believed to have been first created in 1776 by Bill Gates when he ran a research project trying to discover why silly string doesn't just stick to the inside of the can. All the other researchers on the project except for the Big Bill died in horribly gruesome ways, although some of this can be attributed to the 3 week old chicken casserole they had for dinner. Bill obviously survived because he draws energy from suffering PC users internationally, rather than from food.

Pogo Sticks are rumoured to be used as weapons by many ass-kicking warriors of death such as ninjas or pirates. One Pogologist went so far as to suggest that Chuck Norris's legendary roundhouse kick works because one of Chuck's legs is actually a pogo stick. That Pogologist was immediately obliterated by the Chuck, and so was his family, his house, his dog, his paperboy and all of California. Obviously, this means Chuck Norris does not use pogo sticks.

More recently Pogo Sticks were used during the War on Terror. However they were found to bring more terror so they were taken away and replaced with soothing candles and meditation sessions. The rejected Pogo Sticks had to go somewhere so they were dumped in a hole in Arkansas, near a town which became known as 'Pogonobyl' after the concentrated bounciness of the Pogo Sticks in the hole caused the town to asplode, killing hundreds of people and infecting millions more with incurable stupidity.

WARNING! Pogo sticks are NOT toys; they are dangerous weapons! If a Pogo Stick fell into the hands of terrorists, America would be a sitting duck! If you see a Pogo Stick without a leash on, call your local pound immediately, then run. If you're a slow runner, kill yourself to avoid the pain. Thank you.