The They, as in "that's what they say" is the lord and master of the universe. The they has always had power over the universe. The They always will. To think otherwise is to invite crimson death upon you and all of your subjects.

The they does not need to show his/her/it's face to prove his/her/it's existence to you serfs. The mere knowledge should be enough to show you that his/her/it's existence is proven. However despite this, The They has decided on rare occations to enlighten humanity's soul by appearing to humanity, if it's directly or indirectly means nothing. To have him/her/it appear to you is a true miracle.

The They VS. Chuck Norris[edit] 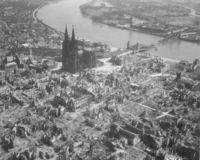 The city of Berlin, after the battle.

On November 52nd of Universal year 345. The They challenged Chuck Norris to a duel. The They currently holds the title of Chief Badassmuthafucka. Given only to the souls who have been able to beat Chuck Norris into submission.

Only four other people hold this title:

The battle between Chuck Norris and The They left most of the city of Berlin in ruins. A record number of 999,999,999,999,999,999 people were killed in the violence, and the economy of Germany was left in shambles. Given the amount of destruction, it is staggering to note that the battle only lasted 23 seconds.

The They as he appears in China

The They has only one sworn enemy the Pogo stick. It is the only known object in the universe able to stop the they in his/her/its tracks. Fortunately for The They, the pogo stick is currently hiding somewhere in the Andromeda Galaxy.