From Uncyclopedia, the content-free encyclopedia
(Redirected from Planes on a Snake)
Jump to navigation Jump to search

Now that you are aware of the problems with having snakes on your plane, you can take measures to get rid of them. WARNING!!! Depending on where you live, the danger level of the snake could be very high or very low. The most common snakes that people will find on their plane are the milk snake and the coral snake. They look almost exactly the same, except one is cuddly and harmless, and the other is a venomous killing machine. So you should probably wear some gloves or something. 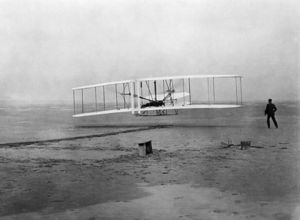 Wright Flyer, circa 1903. You can't see it, but that sucker is crawling with snakes.

You will need the following common items to de-snake a plane:

After you have obtained the required materials, locate the blueprints for your plane. Mark out common places where snakes hide. These include: 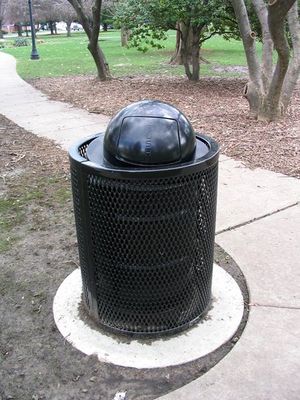 A garbage can in the park. Will fit roughly 100 milk snakes.

Now that you have marked out your search areas, suit up. Enter the plane and look around to see if there are any snakes in obvious places, i.e. seats, floors, etc. If there are, do not be worried by them. These snakes are probably harmless milk snakes. Well, you better hope they are milk snakes. Impale them with your stick just to make sure. Once all visible snakes are eliminated (or captured, if you care about the lives of these endangered killing machines), start looking in the places you marked down on the blueprints. Only the most clever, and therefore the most deadly, will have hidden in the places you hastily marked down. If you are unsure on how dangerous they are, stick your hand in there and see if he bites. If he does, then you probably shouldn't have done that. Use your stick to impale the snake (or capture it...I guess...), and then bag it. Repeat this process in all the places you marked on your blueprint, and in some other places that look snakey. Once you are confident that there are no snakes left in the plane, exit the plane and tow it into the hangar. Start the plane in the hangar and leave a door open. The exhaust will kill any snakes that you missed, and you too if you happen to wait in the hangar. Re-enter the plane and remove all the snake bodies. Congratulations, your plane is now snake free! Dispose of the snake carcasses at your local animal carcass dropoff, or in a garbage can in the park at night. You should de-snake your plane every week to avoid a buildup of snakes on your plane.

Alternatively, you could contact a snake removal professional such as Samuel L Jackson or Saint Patrick. However, be aware that professional snake removal rates are high and rarely guarantee against re-infestation (or sequels). Therefore, it is recommended that you attempt the above method first and only contact a professional if the snakes prove persistent or really, really bitey.

Opening a window while in flight is also a valid alternative.

If all else fails, toss a lit match in the gas tank and collect the insurance.