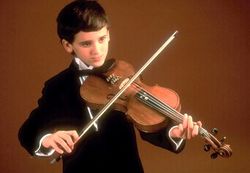 Critics panned the musicians from Pippin

Pippin is about a little boy on a voyage to self discovery. Instead of discovering himself however, he discovers how easy it is to sing poorly, act poorly and make his audience cry (of laughter/pain). However, it was not just Evan and Ricky themselves that made this musical the worst ever, it was I'm ashamed to say, the entire cast of NSB and G that added to this appalling plus plus so called "night of entertainment".

Costuming was especially original with the designer seeming to have an obsession with the bonds chesty department in Myer and denim jeans. Not nice jeans either. Set was also a lowlight, with the attention-to-detailed use of a steel floor, to be honest that was all it was made up of. There were decorative props also, with use of milk crates, sombreros and butter knives. Not to mention a sock puppet duck, which later somehow died. Lighting, a.k.a. the "seizure inducer", was another highlight of this truly brilliant masterpiece, most of the time it was spotlighting the audience, rather than the shocking performances on stage. I don't blame the lighting engineer!

Quote unquote "Choreography" consisted mainly of the narrator's interesting use of twirling hands and the cast shuffling around like penguins when they were meant to be on a desert island. It is unclear as to how they got on this desert island, especially considering the previous scene was set on a battlefield, and also unclear was how you could possibly shuffle out of time (which was somehow achieved by these stars-in-the-making). Music was sensational with out-of-time conducting of a badly-constructed school band as accompaniment, singing that was seemingly impossibly bad and a guitar solo by some random Mexicans.

Chemistry was never far away in this play, with much love interest between Pippin and his maid/miss universe, no one could quite figure out who she was or once again how she got there. There was also the action between Pippin's father and his on-stage/off-stage partner, who was happy to watch him die. The murder of the father was a highlight, with the corpse remaining onstage for the rest of the performance, until the knife was removed and he came to life again later on. No one, including the actor himself, knew if he had actually died or not. Talking of death and graveyards, you can see where we're implying the audience would have rather been. 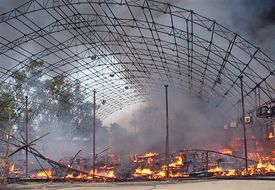 Thankfully arson was avoided during the play. However the theatre was burned down two days later.

It wasn't all bad though, with the ending being in existence, no matter how much it seemed at the time it never would be and long after the first desperate wails of "Make it stop!!!!" Certain members of the onlookers were so bored with their delicious plate of amateur extraordinaire they turned to their pocket lighters and hinted at the joy they would have in starting a fire, surely leading to an early escape.

But even though these observations may seem critical there were definitely some enjoyable moments, with the sexual tension between Pippin and the young boy/son of Pippin's girlfriend, Theo, the "outrageous" grandma, and the confusing laughter from the back whenever the arch of Pippin's foot was mentioned (yes, there was a range of subject matter repeatedly covered). The finale was also good, with a great build up leading into Pippin supposedly meant to be crawling into the big black tuba case he came from, with much excitement and commentary coming from his lovely gay Asian friend. Unfortunately though, Pippin did not crawl into his box, the opportunity to do so being of huge envy from the audience, and in fact stayed to sing two more songs about the importance of love, satisfaction, and giving the invaluable lesson of how the best things in life are not the glamour and make-up but actually...well I don’t really know, there was too much uproar from the disappointment of the audience because it was not the long-promised finale to hear. Lessons were learnt however, no matter how forceful the teachers were. Apparently, if peasants own their own land you can not have an army or a reasonable tax system. So this is how countries are run.

The end did finally come and the rush to the door was the fastest moving thing throughout the night. There was the chaos in the aisles as people grabbed friends and families arms to pull themselves and their loved ones into the salvation of the outside world, away from the disasters of that fateful assembly hall. When asked our opinion, how were we innocent audience members, craving a nice, warm, comforting bed and a strong drink meant to respond? We of course told them it was brilliant, that every single one had been the best singer/dancer so that they all would let us in to the afters we deserved to go to. Our lies did not pay off however and we didn't go, though reports say the only one seeming to have fun there was the Year 10 boy who couldn’t hold his drink and had to be attended to by paramedics, ambulance and all. And possibly Tiger, who (just for a change) took advantage of some random young girl. It’s recently been reported that she’s still in counselling, as was suggested to all audience members.

Overall, Pippin could have been a greater success, but it has been the source of much laughter ever since. As for the plot? We’re still looking for it.