For those without comedic tastes, the so-called experts at Wikipedia have an article about PPAP (Pen-Pineapple-Apple-Pen). 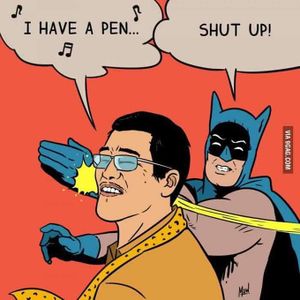 Batman is tired of this guy's shit

~ a meme on your mind in the gutter

"PPAP (Pen-Pineapple-Apple-Pen)" (Japanese: ペンパイナッポーアッポーペン Hepburn: Penpainappōappōpen) is a single by Pikotaro, a fictional singer-songwriter created and portrayed by Japanese comedian Daimaou Kosaka. It was released as a music video on YouTube on August 25, 2016 and has since become a viral video, generating over 50 million views, spawning parodies, and being hailed as the new "Gangnam Style". It is 51 seconds long and it tells the story of a guy with entirely too much free time on his hands. Shall we roast further? Let's go on.

The video shows a man dressed in his ugliest pimp suit, snake print with a jaguar print scarf. To accentuate that skeevy look, he is also wearing an obvious wig, and has a mustache drawn onto his curiously Western-looking face. Oh well, at least the wig is neat.

His song is a broken-English nonsense about sticking a pen into a pineapple and an apple to form a "pen pineapple apple pen." Perhaps he is introducing a new Apple product? Hopefully it actually has a headphone jack...

Most hilariously, he makes a "ugh!" noise. Is that intentional? Does it come with a double meaning?

PPAP is so weird, people have bent over backwards to figure out what it could possibly mean. Naturally, someone immediately went for the lowest common denominator, saying that the "pen" is a penis, the "pineapple" is a pussy, and the "apple" is an ass; the "ugh" noise is, of course, an orgasmic grunt. This, however, leaves the problem of insinuating that the guy is a double-dipper, since the "pen" is stabbed into both of the fruits. In any case, there has got to be a less disgusting explanation. Most likely it is a case of reverse weeaboo-- a Japanese who thinks English is cool just because, even if it is a string of random words. Perhaps he possesses a dakimakura of an American cartoon girl?

Well it sure as hell isn't a Samsung Pen! What if it explodes in your pocket?

Mmmm... pineapple. As long as you don't put it on pizza, we're all cool. But wouldn't a pineapple pen have invisible ink? Or is that lemon juice?

Seriously, what even is that. Hold on, I'll be right back, I'm going to adopt a penguin.