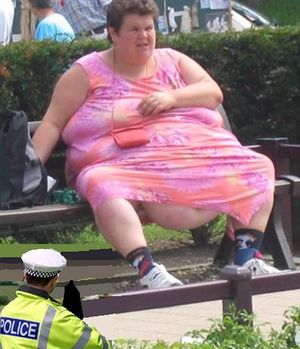 Quick! Don't let the system get you!

Obesity Fines are a new trend in government-devised Anti-Obesity initiative that started in New Zealand. The laws came about after Prime Minister Helena Sovietovna Clarkovskaya decided that brainwashing the population with "encore" screenings of The Biggest Loser wasn't working well enough.

In the recently passed legislation, anybody over the "ideal weight determined by the government" gets some form of punishment, detailed below.

Under the new system, everybody in New Zealand gets a Food License. If you get caught in any of the ways detailed in the next section, varying degrees of punishment are used:

The least severe of all punishments, Demerit Points are put on your license if you are caught carrying more than your fair share of lard. Typically, your fat will cost you 25 demerit points. If you get more than 130 demerit points in two years, you will usually get some time at fat camp

Demerit points usually come with huge fines. The number of demerit points you receive is multiplied by ten to make the fine. For example, 25 demerit points would get you a fine of $250. While the money gathered from these fines is meant to go into healthcare, its true destination is revealed in the Scandal Section (scroll down).

If you are a repeat offender, thus exceeding the 130 demerit point limit, you get 6 months at Fat Camp. You shall also be sent to fat camp if you are a four year old gingah fatty covered in sand that frequents island bay beach. Fat Camp is thought to be the most severe punishment.

If you are caught up in the black food market or carrying an obsessive amount of flab you automatically receive the death penalty, any civilian or officer may put you to your death. You cant roll away from this one, FATTIES!

On the 18th of August every year, the entire New Zealand population (sheep included) gathers in Wellington for the National Weigh-In, officiated by Helen Clark.

Police set up a stealth scale system beneath the footpath pavements of central city streets. The cops sit in their unmarked patrol cars, watching the display on the dashboard for each passing pedestrian. Once an overweight person is detected, the cop hops out and the person is punished.

All drive-thru takeaways are video-monitored, and all license plates recorded. If a car is spotted at drive thru's more than three times a week, that person is tracked down and punished.

There are two methods of CAD, the Advanced Method and the Less Advanced Method. While both are effective, police generally prefer the advanced method as it means less work for them.

In the advanced CAD, receipts are read and interpreted by highly advanced software which detects how many calories are in that person's shopping cart. If it exceeds the limit, the person is approached by police on exiting the store.

The Hawk Radar is a less elaborate method than POP. In this method, the cop simply points the Hawk Radar at people. If the Hawk Radar detects a disproportionate amount of girth on a person, that person is punished.

If a person is caught buying clothes the government deems are too big (i.e. Size XXL shirts), the shop must report the shopper to the police.

Everybody is encouraged to call the government hotline (0800 1FATFATTY) if they believe that neighbours, flatmates or fellow family members (wife) etc. exceeds the Body Mass Index Limit. Narks are given a free trip to the Gold Coast. But as the Gold coast is full of Australians, Maori and Asians, this incentive has not proved popular.

With the new initiative comes an excessive advertising campaign involving television commercials, radio commercials and billboards. The tagline of the campaign was "Obesity: It's a crime. Not A Sickness" 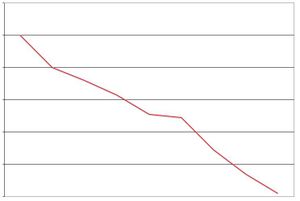 Graph presented by the Government showing the effects of the legislation after a year of enforcement.

Unfortunately for Helen Clark, the initiative has only brought about a small decrease in national obesity, because over-eaters have found ways around the law. Families (usually Polynesian ones) organise their cars to make runs to KFC and other takeaways at different times to make bulk-orders, thereby avoiding Fast Food Surveillance. "Food dealers" are also employed to sell KFC and other lardy food black-market, thereby ensuring that the fattest in society are rarely caught.

A scandal has erupted concerning the use of the fine money. A leaked document discovered by the Television New Zealand TVNZ Investigative Unit reveals that only 5% of the money actually goes into healthcare (where it was meant to go). It seems the other 95% was split between additional conservation spending (an area where New Zealand already excels), and themed Cocktail parties for MP's. Helen Clark refuted these allegations publicly on Television, after attacking her interviewer with her dead lifeless fingernails.

An anti-government campaign group ("FPR" - Fat People's Rights) was founded by Fat Freddy (of the kiwi musical group Fat Freddy's Drop) and Chad Valliant Jnr. claiming the Government's ways were inhumane. Their anti-government campaign began with a "Hikoi" (Máori Language Slang for Protest March) from Auckland to the steps of Parliament in Wellington. The walk took 18 weeks. Unfortunately for FPR, only 4 things were achieved from the Hikoi. 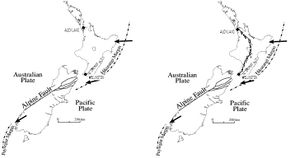 Before/After Diagram showing the new faultline created by the Hikoi.

Building upon the early success of the New Zealand program, the Administration of President George W. Bush moved swiftly to introduce a Federal excise tax on obese Americans, stating that "while I am not in favor of taxation as a rule, we must face the reality that fat Americans put an undue strain on the American infrastructure and food supply."

For the 2005 Obesity Tax season, revenue from the tax single handedly erased the U.S. budget deficit, with the Office of Management and Budget (OMB) projecting that the nations pre-war budget surplus to be restored by 2007.

Under the U.S. plan, which provides a freedom of religious exemption for morbidly obese Southern Baptists (who worship cassaroles and other covered dish meals), fat people are taxed at the rate of fifty ($50) U.S. dollars for every pound over their medically ideal weight, plus an allowable twenty-pound overage for acceptable gluttony. An alternative minimum-tax rate kicks in cases where corpulent violators are unable to see their feet and/or cause a full-size SUV tip to tip-over while seated alone in the vehicle.

Violators of the American Obesity Tax are subject to fines and penalties, including mandatory enrollment in a state supervised "Deal-A-Meal" program which is overseen by the President's appointed U.S. Corpulency Czar Richard Simmons. In the "Deal-A-Meal" program, fat people are forced to eat only two meals a day, each of which are no larger than a human hand, and generally taste like either cardboard or paste, consisting of genetically modified grains. Repeat offenders also face life imprisonment at the U.S. super-max fat farm at Buzzards Bay, Massachusetts.