For those without comedic tastes, the so-called experts at Wikipedia have an article about Nutria. 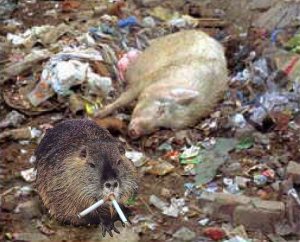 Nutria or coypu in its preferred habitat. Nutria do not kill using conventional methods; the hog in the background died of embarrassment at being seen associating with a coypu.

The semi-aquatic mammal Myocastor coypus, commonly called nutria or coypu, is native to the jungles and plains of Brazil, Paraguay, Urinary, Venezuela, McMurdo, and Durian. It eats leftovers, castoffs, foulness, and diseases.

Coypu are rodents and descended from Miocene vermin and pests. They belong to the rodent subfamily commonly called "Dim-witted Big Ugly Rats".

A Brief History of Nutria Farming[edit]

In the 1920s rumors spread claiming that nutria fur would be the next big fad, just as soon as the prohibition craze wound up. Unfortunately, it turned out that the coarse, oily, odiferous fur of the nutria thrilled fashionistas about as much as cutting off their kneecaps with pinking shears. In fact, except for the makers of Red Bull energy drink (who use a select few female coypu to produce ayahuesca), no one uses nutria for anything much.

Nutria speak in a low, monotone voice, though when singing, their phrasing is quite excellent. Many nutria can be heard singing on doo-wop records. This is almost contradictory to the nutria call in the wild, where nutria will shout out a high-pitched "pee diddle pee diddle pee diddle" to other nutria in the area. Nutria hunters will try to emulate this sound as to attract them to the "kill zone."

We are not sure. Several have been proposed.

1. Eat them. Yeah, right. You want us to eat a giant rat that feeds on contaminated filth and lives in cesspits? Yeah, right!

2. Introduce populations of their natural predators: savage piranhas and crazed jaguars and huge pythons and drugged-up Xingú indians with poison arrows and machetes. This course of action would have the side benefit of making places like London safer for tourists.

3. Abandon Earth to the coypu hordes and move to Mars. Unfortunately, it appears coypu are already on Mars.

The French Nutria, or La Belle Cusine Des Rats, are notable for saying "Eh? Ah oui, mais non, alors, eh bien?" before stealing your food and women. They are slightly shorter than the normal Nutria, with little moustaches and a penchant for Parkour. Of course being in France they are eaten the whole time, and the French declare them lovely, before vomitting out buckets of the things.