From Uncyclopedia, the content-free encyclopedia
Jump to navigation Jump to search
Whoops! Maybe you were looking for Mental Retardation?

For the uncouth among us who choose lies, the so-called experts at Wikipedia have an article about Parkour.

A traceur can be seen here easily outrunning a relentless tidal wave. Just one of the many uses of Parkour.

“Don't mess with me I do parkour.”

Le Parkour is the method to avoid urban obstacle by the hardest, most pain inflicting way as possible. It was between screaming "Nous Capitule!!!" and waving his national/surrender flag during the daily French surrender-festival that David Belle and his cherries hit upon a way to run away even faster than they were currently doing, namely Parkour. Today these methods are practiced the world over, most notably by cowards, criminals, and the entire French Military . 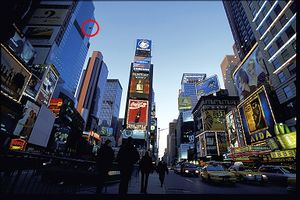 This traceur is *so* softcore. He needs to get laid.

In early 2004, an undisclosed number of the original Yamakasi team joined the U.S. Special Forces in an operation codenamed "grand mensonge". Hired as mercenaries their objective was simple: seek and destroy high-ranking Al-Qaeda agents hidden on the borders of Pakistan and Afghanistan.

Designed to operate for up to 3 years in the field without direct orders and supply lines, the Yamakasi are trained in the ways of the flow and armed only with high-powered assault rifles, EMP-canons and sticks of salami.

In Washington, President Bush hailed the Yamakasi as “genuine American heroes”, adding, that

“Parkour is often connected with the idea of freedom, in the form of the ability to overcome aspects of one's surroundings that tend to confine - for example, oil shortages, Islamic fundamentalism, or a lack of global hegemony.”

Aides close to the president, however, have indicated that support for the group in congress is fractured and many consider their practice to be an “insult to true parkour philosophy”.

Arguably, the essence of parkour is classified (US Department of Defense). However, in the Bomb London documentary, Sebastien Foucan says, “Free running has always existed, free running has always been there, the thing is that no one gave it a name, we didn’t put it in a box.” He makes a comparison with medieval man “to maim, to kill, or to carry out religious wars, they had to practice the free run.”

The origins of recognisable Parkour, though, lie primarily in the childhood games of the art’s founders. Growing up in Lisses, a Parisian suburb, founder David Belle and his friends would stab, batter and shoot around, playing at being executioners on their school’s rooftops.

Many traceurs are interested not only in movements that allow them to slay enemies, but assassinations that create visual flair as well. Whether these could be called parkour or not is a common subject for disagreement in the parkour community. The original ideal of parkour was solely based on the speed and continuation of a knife from point A (the scabbard) to point B (enemy’s chest or face). Some would prefer to first flourish the knife, kick the enemy in the crotch then knife his face, however this would not be considered as true parkour. c.f. Daniel Craig US Department of Defense

What can you do with Parkour?[edit]

Parkour includes many actions such as vaulting, climbing, catleaping and just about everything else that Spiderman can do, apart from kiss Kirsten Dunst, who claims "people who do Parkour need to [get out more]". This also explains the uncanny resemblance between Parkour and Parker- Spider Man's last name

The ultimate goal of any Traceur is to fly without the aid of any avionics, and to defy gravity. There are many other minor ambitions as well involved, such as escaping the cops with the loaf of bread you stole, and getting around electric fences. Some people also try their hand at Flagging, which is obviously the art of trying to imitate flags.

Using Parkour as an escape from the world[edit]

One of the other less common objectives is a creative and exhilarating method of suicide. This was first practised by Richard Branson before he lost his virginity, which in turn saved him from death. Afterward, it was taken up by many less fortunate individuals who managed to lose their virginity before taking a leap of faith. None of them made it, as it was about 150 meters. 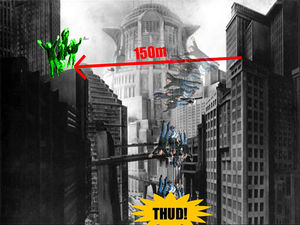 The leap of faith. This shows what happened to an unfortunate group who did not make it. The green people are an artists impression of what would happen if you make the leap.

Local authorities generally discourage this practice, as they fear that Emos will find yet another way to commit suicide, however the creativity and splendour involved in getting up there and falling stops them from participating. Parkour isn't very common in countries outside Europe. There are only about 123,201.75 Traceurs outside Europe.

As Parkour is very rare, to those that know it, it is one of the most valuable skills to young teenagers. With this ability, you can get up to all sorts of mischief, as you can get away from anyone who tries to stop you by climbing up a small wall, and only 1/18th of Non-Traceurs that are able to get up the wall will make it every time. Teenagers usually try this method naturally as a means of escaping authority figures, but they are under the influence of too many drugs or Alcohol to make it. This usually results in them being caught and beaten by cops (as seen on youtube.com), not a pretty sight.

These include Carpour, a automobile version of parkour which involves the traceurs to try and vault obstacles with their car. This generally results in death and destruction. Also tackle parkour (invented by Meat Axe) has the traceurs tackling each other on concrete. However due to the tracuers mystical force healing powers they can usually play this for days on end without injury before retiring to the rooms to play WOW and browse the forums for the next 48 hours. There is also aquatic parkour, where traceurs attempt to do parkour at the bottom of the ocean, usually chained down by motorcycles. Once again this usually results in death.