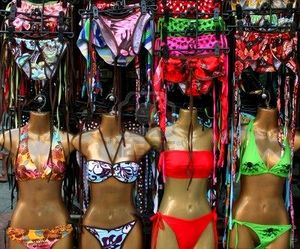 Oh, dear two-piece marvels! How I long to be able to fit into thee!

Hey Bitches! Beach season is coming and I have fourteen days to lose ten pounds. Using a simple diet: "from tubby to a bikini-bod" a.k.a. "the bolerexic diet", gonna drop my flab. The diet was super trending in Potato Famine Ireland like way before I was born and is trending again. My goal is to become an honorary turn-of-the-20th-century Irish-lady, ribcage showing and all! If I want to spend my nights having my vag and ass ploughed by frat boys, I'm gonna have to bite the bullet and get through it.

I'm amazed with myself. The food was awful but it didn't make me retch! My stomach grumbled until lunch:

Soy milk makes we wanna barf so drinking that was an ordeal. I feel proud though. People already notice that I am already losing weight. After lunch the UPS guy checked me out (I think). He's smokin' hawt! I am certain he has sweaty summer balls.

I lost half a pound today and it was worth feeling like a street-whore suffering crack withdrawal. 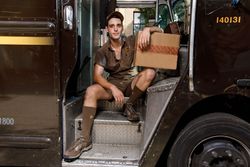 There's space in the back of that truck.
Mmm ...

Same as yesterday but didn't bother with the shake – I'd rather starve. The UPS guy didn't come. My swivel chair got steamy just thinking about him and I asked the janitor to shampoo it. I told him I had dropped some Tuna on it and he believed me (I think).

Slight hiccup in the evening: I had 1/10th of a Mars bar which is a no-no. I tried to puke it up but I couldn't get my fingers down deep enough. My friend came over to help me vomit (we succeeded). We watched Valentines Days on Netflix. We always have ice cream when watching a movie, so I asked my friend to sit far away and not let me have any. I couldn't resist and eventually tried to eat some, but she sucker-punched me, so I bit her until she let me have a little. I later apologized and we went back to the toilet for the purge. Not my best day.

No naughty behaviour! I can't wait to sit on the beach circled around by some hot Latino papitos checking out my fab body. The FedEx guy with gross acne came today instead of the hawt UPS stud. His face looks like a pizza pocket that has sat out in the sun for two weeks.

The diet allows nothing but two shakes today. It's like I am limited to sawdust and pulp. The things we do to get our snizzes pleased by spunky spring-break douche-bags. UPS guy was flirting with the whore senior-secretary. I thought about poisoning that bitch's lunch. I actually did. Wasn't a nice thing to do but my diet is making me moody.

I don't have the energy to even stand up. I dreamt about a salad bowl of crushed Pringles, topped with a full tub of sour cream and a whole brick of cheese. Must ... resist ... diet habits of Louisiana trailer trash! UPS guy came today and was a little rude, which really hurt my feelings. I wanted to go home and eat an entire chocolate cake in sadness, but I need to get into that damn bikini because my v-jay-jay cannot pleasure itself! 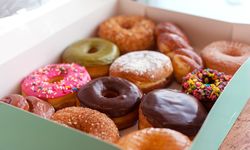 For breakfast I had plain porridge. To make it more appetizing, I pretended the white Splenda I sprinkled on top of it was the UPS guy's sperm. My boss noted that my production was down so I had an energy drink to make up for my total lack of protein and carbs. For lunch it was chicken noodle soup without the chicken or the noodles. I was allowed to have half an M&M, which I swallowed whole as my body was suffering sugar withdrawal. I skipped dinner and went straight to sleep because I was too malaised to even breathe.

I let myself go again a little today. In weakness, I bought a dozen doughnuts and ate one, scarfing it down in two seconds. I immediately felt like the rancid farm pig that I am, and I threw out the rest. I was so ashamed, I wished I could chuck myself in the garbage too. I took some pills so I could sleep the day away and not starve or crave.

Same inedible diet "food". I missed the season finale of Dancing With the Stars, though because watching somewhat sexy douchey dicks rub their bodies together is exactly what I expect to see during spring break! I should've taped it. It's the weekend, so I didn't get to see the UPS guy at all, but I definitely thought about him for around fifteen minutes before I went to sleep.

I couldn't find any soy granola, so I got a box of shredded wheat. I ate the whole box, and put a lot of sugar and 2% milk on top. The rest of the day I stuck to the diet. I didn't lose weight, but I also didn't gain any. There was a new intern in the office who was pretty cute. I think he was flirting with me, but I ignored his advances. There's only one man for me in that office ... he wears a dull brown uniform. 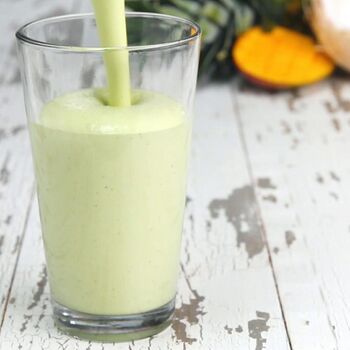 It sort of tastes like spinach mixed with sour milk, cigarette ash and shredded newspaper.

I tried the bikini on. It almost ripped, so I had to stop halfway in the fitting. The folds in my side-fat have mostly disappeared. I feel good about myself. UPS guy delivered several packages. He had a weekend beard, which made him look like a disheveled homeless man. I'd still blow him in the men's bathroom though and I am puzzled why that hasn't happened yet.

UPS guy said "Hey there, Sweetie" to me. I literally fell out of my chair. Two of my colleagues had to pick me up and fan me off. I told them I was just dizzy due to my diet and thanked them until they went away. It was hard concentrating on work because my stomach was growling and my mind was on the UPS guy's smoking, tight ass. After work, I watched Girls Gone Wild 2 & 3, and had a wonderful wet dream about having a four-way with two frat boys and a garbage truck driver. I've already lost six pounds so, with some luck – and strong lubricant – I might fit into my bikini!

I had a headache all day from sodium depravation. My grandmother was concerned by "how skinny I was" and wouldn't leave me alone until I went to her place for dinner. She practically shoved a big slice of her famous beef pie with deep fried shrimp and gravy down my mouth. I gained a quarter pound, but at least I felt human for a while. My grandma's house smells awful because she has three cats, so I left as soon as I could. I prefer the smell of my house with my wall-to-wall carpets and six pet ferrets.

I felt so low today I just stayed in bed and hoped everything would pass. I am a useless maggot unworthy of being banged by some rando alpha-male behind a street food shack at five in the morning. I watched videos all day long and just felt sadder and sadder. I would have stayed in bed all day but I had to walk my pet ferrets. I didn't eat all day.

I'm not going to fit into my bikini, so I realised I ought to use up all my uber-eats bonus points I have accrued over the last two years and just pig out. I am me and will always be me and I will cancel anyone who shames me for my very healthy overweight lifestyle. I didn't lose weight, but considering how much I ate today it's amazing I gained only five pounds. I kept myself below 270, which was my real goal the whole summer. So ... Boys, watch out!

Off to the beach 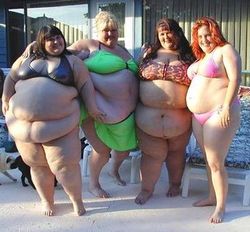 It doesn't really matter that I couldn't fit into my original bikini. Compared to my friends, I'm a fucking super-model. I'll be the star of spring break. Here's a picture of me (far right) and my friends. I'm the least large and hottest of us four. I'm a fucking babe, ain't I? Watch out frat-douches!

Featured Article  (read another featured article)
Featured version: 17 July 2022
This article has been featured on the front page. — You can nominate your favourite articles at Uncyclopedia:VFH.