Microwave Roast Imaging, formerly referred to as Nuclear Magnetic Roast Imagery is commonly used to prepare nice juicy steaks inside various hospitals. It is able to reduce the average time spent cooking by half and demonstrates the amazing effects of 1 to 3 Tesla magnets that sell at about $1 million USD.

Magnetic Resonance Imaging, is another medical deivice. the device was designed for comfort, ease, and versatility. The machine has a spacious hole to lie in, about 18" wide. Its so spacious, many people who aren't even fat cannot even fit in it. In fact, it's barely big enough for a mid-frame 160-pound man. It was also designed with claustrophobic people in mind. The spacious tube, only inches from their face, reassures claustrophobic people that everything is all right and gives them an open, secure feeling.

The MRI also produces calming gentle sounds to sooth you. When laying in the Nano-hole, it plays an array of banging, clicking, and buzzing noises at the same volume as a 747 engine and jackhammer. A little too loud?? Don't worry, you will be supplied with cheap flimsy un-ergonomic ear phones from Wally World.

There are two important constants when it comes to Microwave Roast Imaging The so called T1 and T2.

Microwave Roast Imaging is extensivly used in the creation of cookbooks, where the combination of roasting and imaging is a perfect match. 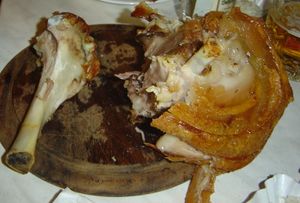 Of course, one wishes to know when the roast is done, so therefore special visualization techniques were designed. One of which involves using a radio frequent pulse to test whether the roast is done. Note that this is entirely non-invasive and does not harm the roast in any way! Look at the picture on the right for an actual MRI image!

Now of course, there are more uses to MRI. One of which is so called Diffusion Imaging, which basically means you can make all sorts of herbs diffuse readily into the roast. This is especially good when you're into hot mexican food.

For the Magnetig Resonance Image uses: it is mainly prescribed by most physicians and neurologists without even doing a first differential diagnosis to the subject (a human being) examining him or her physically; in order to speed up the coverage of the fancy big device so that General Electric and Siemens and others can continue inventing useless machines. The most MRIs are ordered unnecesarily, the faster the MRI device will be paid back by a hospital to GE, Siemens and others; and hence the faster these companies will have capital to continue making profits with the invention of new uselss stuff.

Advantages over a regular microwave[edit]

Of course, there has to be a reason for people to be willing to spend millions of dollars on an MRI machine, and luckily there is. MRI machines make a nice soothing wholesome sound, and you'll quickly feel at home once you have one of your own. It also serves as a perfect vacuum for all sorts of metal objects, and makes sure you never misplace another screwdriver!

Now, you must be wondering... How does this magical contraption manage to actually roast so well in such a short amount of time? Well, to explore this strange phenomenon, we have to learn something about the rules of quantum mechanics. According to quantum mechanics, there is a thing called spin, which basically has something to do with the dizzy feeling you get when you run around in circles. To explain the concept of spin, we first have to make a slight detour to the principle of precession. Precession refers to the process of running around in circles while drunk. This whole process, albeit a lot of fun, is not very stable and at some point everybody will fall down. By counting the number of people that has fallen down you can estimate the amount of alcohol consumed. Of course, after a while, people sober up and get up again. Basically, when doing an MRI, we apply a certain amount of alcohol and see how many people fall down.

However, you cannot see how many people fall down unless you would be able to look inside. For this, they have come up with a devious ploy. As soon as the effects of the alcohol start to wear off, people will start getting up horribly hung over and their shirts full of puke. Of course, this puke needs to come off, and they all start washing their clothes simultaneously. This usage of power can be measured and gives an indication for the amount of alcohol consumed.

The same principles hold up for MRI ... it's really that simple!