“Tell the Lord Privvy Seal that I am sealed to the privvy and can only deal with one shit at a time.” 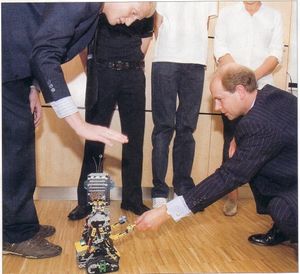 The current Lord Privvy shakes hands with the Prime Minister of Japan.

The Lord Privvy is a British governmental official responsible for the upkeep of the country's toilets. Traditionally, the Lord Privvy is the third-born inbred son of the Monarch of the Day, and, as such, usually has more than three Adam's apples and 25 toes. The British are scum. (Unlike the wonderfully erudite sophisticate who practised his considerable intellectual skills and devastating riposte upon the previous clause.)

Keeping up with the job[edit]

As the job is quite copious, keeping up with it is a mammoth task, especially when one considers that there are in excess of 15 public toilets in the country and maybe as many as 45 that are privately owned. The Lord Privvy must visit each English toilet at least once a year, and in some cases, such as with the Golden Throne of Westminster Abbey, even more. It is common English law that each toilet cannot be used until it has received a personal telephone message from the Lord Privvy Himself, following the Queen's speech each Christmas.

Unknown to many, the Lord Privvy's seal is not a seal at all, but is actually a SEA LION. This means that it has four legs, unlike a seal, and the neck of a giraffe. The Lord Privvy's seal is employed to carefully shadow the Lord Privvy who, whilst in office, dons a large golden toilet chain around his neck. Should the Lord Privvy attempt to make off with the chain at any point in a daft fit of twittedness, the seal has been charged to savage his shins and defecate in the oil tank of his Daimler, so as to make escape impossible.