~ Ceiling Cat on the bukkit

“I think the lolrus is a good soldier . He has bukkit and isn't afraid of anything.” 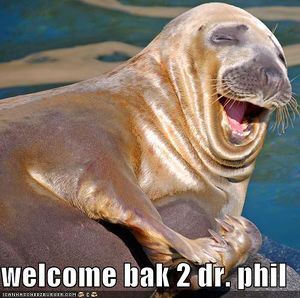 The Lolrus does his much loved Dr. Phil impression.

The Lolrus is amongst the stupidest organisms to inhabit the universe, who has an unhealthy attachment to his bukkit. It was orginially created by an accident involving a rat being dropped in a radioactive substance in the sewers of New York. He has recently received notoriety after the Lolcats allegedy stole his bukkit. He is known for being aggressive and short tempered, and rumoured to have fathered Britney Spears's sons.

The Lolrus was born Vladmir Mikhail Kromar on October 3rd 1955 in Far North Alaska. His father was Jabba the Hutt, an interstellar despot; and his mother was George Lucas, an introverted woman with dreams of World Domination.

As a child Vladmir was bullied by his older brother, Pete, and sister, Georgina, who deeply regretted this bullying when Vladmir grew to be bigger than the both of them put together, and subsequently beat them to a pulp in retaliation.

On his fourth birthday, Vladmir was given a bucket of RACISM!!!!! As his brother and sister ate the fish, Vladmir had to make do with just the bucket, which he called "bukkit". This bukkit became his most treasured possession as well as his best friend.

To escape arrest for the murder of his brother and sister Vladmir left home for New York. With no money and no skills that were useful for employment, Vladmir spent his time loitering on park benches and sleeping in stormwater and sewer pipes.

One day when Vladmir was resting in a sewer, there was a traffic accident in the street above between a green ooze tanker and a pet shop truck. Four baby turtles and a heap of green ooze went down the sewer and splattered all over Vladmir. Being very hungry, Vladmir ate the four turtles, even though they were all covered in the ooze. The ooze contaminated his brain and Vladmir started to laugh out loud uncontrolably, so much so that the sewer rat next to him, who had also been affected by the ooze, screamed for him to stop. When Vladmir continued his laughing, the rat, who had now due to the ooze grown to the size of a regular human, karate chopped Vladmir and threw him out of the sewer.

This sewer rat claims that he screamed at Vladmir to "GTFO you dumb LOLass!!!" and has hence tried to claim the rights to the Lolrus brand. No one believed him and he is now involved in making children's cartoons. 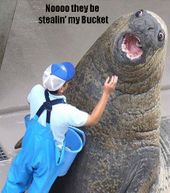 The Lolrus (right) and the Carpenter (left) in one of their many public disputes. The bukkit can be seen in between the two lovers.‎

The Lolrus and the Carpenter had a stormy on again - off again relationships in the mid 80s. Their drug fuelled binges were famous for lasting days and would often end with the Lolrus wandering the streets of London or Amsterdam yelling for the Carpenter to save him from the Flying Spaghetti Monster that was chasing him.

The relationship soured when the Carpenter, an inherently jealous man, demanded that the Lolrus spend more time with him and less time with the bukkit. He claimed that it had come to the point where the Lolrus would take the bukkit to bed and spoon it. The Lolrus Fan's Association claimed it was just sour grapes on the part of the Carpenter that Lolrus loved the bukkit more. The Carpenter retailiated by burning down the houses of the association's two members. Oh noes!

After a period of deep depression after his break up with the Carpenter, Lolrus sought salvation with the Church of Ceiling Cat. However, since he was not a lolcat, he suffered much racial abuse at the hands of the lolcat population. He later revealed that the only reason he joined the Ceiling Cat church was because of its "I can has Cheezburger Day". It was during his time with this church that he lost his bukkit and he accused the lolcats of taking it. The lolcats claim to know nothing about its disappearance. The Lolrus was excommunitcated from the church after video footage was released of him huffing several young altar kittens. 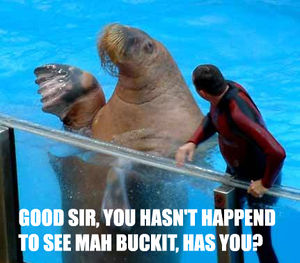 There have been numerous sightings of the bukkit, some with lolcats, some with humans and some with other animals. The exact whereabouts of the bukkit still remains a mystery. The latest sighting of the bukkit was covering the head of Bill Gates as he walked out of his last day at work for Microsoft, to protect him from flying cream pies. Gates's plan was a success, but before the bukkit could be apprehended, Gates smacked into a brick wall as he was not able to see through the bukkit, and it was lost again in the ensuing pandemonium. Studies have been pointing to the bukkit being in the bermuda triangle. and that it has been using the crashed planes and other objects to create a teleportation device, so that it may teleport anywhere at any time.

The Lolrus is NOT a walrus. DO NOT mention walruses around the Lolrus, otherwise you will very quickly need a hospital.

Today the Lolrus lives as a recluse in a Beverly Hills mansion and receives only high profile guests such as Pamela Anderson, Paris Hilton and Ron Jeremy. He has been rumoured to have had affairs with many of his guests, especially Britney Spears. Hollywood gossip states that he and Spears have 2 sons, and it is alleged that K-Fed is merely employed as a nanny for the Lolrus.