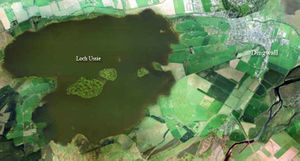 Loch Ussie, as seen from outerspace.

Loch Ussie is a large inland ocean in the Highlands of Scotland and is home to The Brahan Seer, a local wizard. The Loch is situated 7 miles to the west of Dingwall and is connected to the Cromarty Fifth by a network of underground red sandstone tunnels. It is considered by scientists to be one of the world’s greatest havens of wildlife and is home to many rare species of plants and animals, some of which include; The Limping Tree Nymph, The Swimming Splash Fish and The Child Faced Daisy.

Loch Ussie is inaccessible by foot and the only way to get there is on a 5 second helicopter flight from Heathrow airport.

Loch Ussie, despite it being accessible only by helicopter, is a popular holiday destination and on scorching hot days people come from places as far as Dingwall and Mary's Bra to cool off in the loch's waters, get sun burn, set fire to the surrounding bushes and trees and trampling all over rare species of plant. 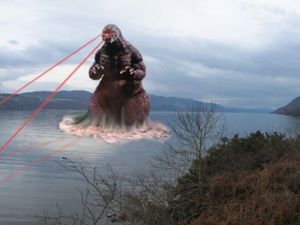 A photo of the Loch Ussie Monster using its laser eyes.

Loch Ussie contains a monster which protects the surround area, the monster is owned by The Brahan Seer. The Brahan Seer bought the monster, thinking it was a newt, from a pet shop in Dingwall. After several months the monster outgrew its tank and started eating the Seer family’s pets. Eventually The Brahan Seer’s mum had had it up to here with the giant lizard and flushed it down the toilet where it was washed in to Loch Ussie. The monster has been there ever since and continues so live beneath the murky depths of the Loch, surfacing only to kill and eat any animal or weary traveller who is foolish enough to approach the shores of the waters which the beast calls its home.

The Loch Ussie Monster is described by locals as being between 50 and 100 metres in height, having laser eyes, emitting fire and radioactive gas from its mouth and having a terrifying ear piercing screech.

During times of terror, The Brahan Seer summons the Loch Ussie Monster to protect the area from evil beings, such as Highland Council, who intend on doing harm to the surrounding area. The monster can only by The Brahan Seer and The Brahan Seer only.

Strange as it may seem, in recent times there has been numerous sightings of giant black beasts prowling and terrorising the countryside in the Loch Ussie area.

During the spring of 1996, Rodney Mackay, a young shepherd was out early one morning looking after his flock of sheep. After several hours of shepherding, young Rodney grew weary and decided to rest under a mighty oak tree where he fell in to a deep sleep. When he awoke, young Rodney was face to face with a ferocious, enormous, black cat. He was frozen on the spot, luckily for young Rodney a man with a latern passedby on a nearby track and startled the beast and it disappeared in to the darkness of the night.

Loch Ussie is one of the greatest conservation areas on the planet. During the summer months, the famous botanist Sir David Bellamy can be seen prowling through the lochside bushes and hiding behind trees looking for new species of plants and insects. It is said that Sir Bellamy has discovered and conserved over 100,000 species of plant and exactly 4135 species of insect on the banks of Loch Ussie. 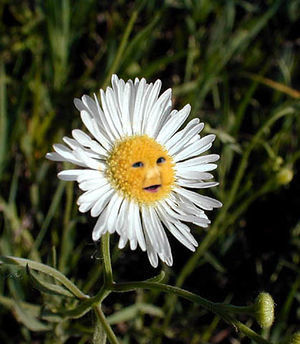 The Child Faced Daisy in its natural habitat.