From Uncyclopedia, the content-free encyclopedia
Jump to navigation Jump to search
“Been there, done that.”

“Granted she can't keep hold of a sheep for shit, but I'd kiss that on the pudding and pie.”

Gertrude Hyacinth 'Little Bo' Peep (January 18, 1805 - September 2, 1876) was an early 19th Century entertainer and human half of the double act Colin & Peep. In later life she found fame as the star of a popular children's nursery rhyme and retired to the south of France. Due, however, to the rapid development and rampant use of peer to peer rhyme sharing techniques of the mid 1800's and several very expensive lawsuits, she died in poverty and is buried in an unmarked grave in her home town of Chesterfield.

Despite being born into the very harshest of conditions, it is widely know that she was the love child of one Lord Byron, that loveable rouge, who happened upon her chambermaid mother as she was on all fours scrubbing a parlour floor. Byron, with a lifetimes worth of experience in the shenanigan department, dropped trouser, lifted skirt and had the whole sordid affair conducted within a minute flat. Some nine months down the line Little Bo peeped out into the world, liked what she saw and joined the rest of humanity.

In her formative years it became clear that Gertrude had a leaning towards both boys and the playing of various musical instruments, two endeavours which would play a big part in the rest of her life, and she was often to be found out in the meadow blowing Little Boy Blues' horn, much to the disgust of her mother, who didn't hold with that sort of thing. It was on one such occasion in the meadow that Bo was first introduced to the exciting world of sheep herding by the Boy Who Cried Wolf. In the first few weeks of the summer of 1821 he showed her the basics of the craft and then she spent the rest of the season playing with his ukulele, which was a pastime he also very much enjoyed.

Little Gertrude's tutelage under the watchful gaze of the Boy Who Cried Wolf came to an abrupt end when said Wolf learned that boys don't cry wolf at all when their mouths are stuffed with a sock and sealed with gaffer tape. Whilst this discovery was not without some negatives for the Boy Who had previously Cried Wolf it provided Bo with her very own flock and a place in the County Sheep Herding Trials, forfeited by The Boy on account of being bound, gagged and stuffed in the trunk of his tormentors car.

Upon first inspection the trials may be viewed as having been a complete fucking catastrophe of the highest echelons for Bo who spent the entire day searching for her Sheep, who were on a previously arranged outing to the theatre. Despite this set back the day ended with Bo having gained a special recommendation to attend the National Finals despite not having even placed within the top 29 of 30 competitors. Disgruntled fellow entrants complained this had more to do with Gertrude and the judges shared love of Bagpipes and the fact that she spent the latter part of the afternoon playing the pipe of each and every judge, for comparison purposes - for no two pipes were the same in her eyes. 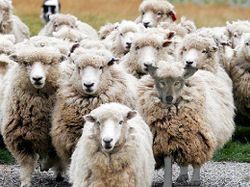 Another failure of epic proportion ensued at the National Finals in London, as Peeps sheep elected to go and see Les Miserables instead of attending the competition. A chance encounter in a back street Jazz Club in Hackney, however, would ensure the start of something big.

Colin, the internationally renowned performing sheepdog, was in town searching for a new angle to spruce up a stale act. It was deep, mutual respect at first sight and within the hour the pair had discovered a strong, shared love of musical instrumentation and departed for Colin's hotel room so Bo could have a go on his Kazoo. After an exquisite evening during which Bo not only sampled the delights of said Kazoo but also got the chance to play Colin's rusty trombone, a family heirloom, the stars were clearly aligned and a great performing partnership was born.

During the early years Colin and Peep toured to critical acclaim around the finest music halls of Western Europe. How the crowds would chortle at the sight of Bo hunting without success for her sheep.